The Skoda Fabia Estate is a great choice for young families, as it comes with a big boot, low prices and plenty of kit 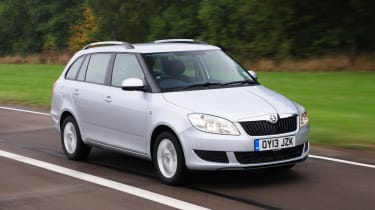 The Skoda Fabia is a popular, reliable and cheap-to-run supermini. And is spite of its compact dimensions, the Fabia Estate version builds on this with its surprisingly large boot space. Skoda's excellent build quality and renowned dealer serivce will add appeal.

It is something of a bargain, too, and it comes with a huge variety of petrol and diesel engines. There are several special versions to pick from including a rugged ‘Scout’ model, the ultra-efficient Greenline II or seriously quick vRS.

Also available as a five-door hatch, the estate version has a longer wheelbase and more versatile boot – making it ideal for small families in need of a bit of extra space for a pet or a pushchair. It’s also good to drive, but there is an issue with refinement in some diesel versions.

As the Fabia shares its underpinnings with the VW Polo, the driving experience is reassuringly safe and composed. A soft suspension set-up means the ride is pretty good, too – the car soaks up bumps with a lot more composure than the close rival the Dacia Logan MCV. Unfortunately, the trade-off for this is that the Fabia rolls from side to side a lot more in bends and the front tyres lose grip sooner than the Logan’s. Natural steering weighting and a satisfyingly snappy five-speed manual gearbox count in the Skoda’s favour, though, as does a nicer clutch action and smoother throttle response.

But the 1.6-litre TDI is far from perfect. It’s very noisy at idle and under load, and the din only really fades into the background when you’re cruising at low revs. On the plus side, there’s less road noise than in the Dacia. As with its budget rival, the Fabia has drum brakes on the rear axle, but the pedal feels firmer under your foot. If you want an automatic gearbox, a DSG dual-clutch transmission is available – but only with the 1.2-litre TSI petrol engine.

It’s not often that £14,630 seems a bit steep for a spacious estate, but lined up against the £10,795 Dacia Logan MCV, the Skoda looks expensive. Still, it’s worth bearing in mind that, even though you’ll fork out an extra £3,835 in the showroom, the Fabia will be worth £2,202 more than its rival after three years, due to the predicted 43.9 per cent residual value. Servicing costs can be fixed to help with budgeting - Skoda offers three years or 30,000 miles for £499. Alternatively, you could go for the 88g/km 1.2-litre TDI GreenLine Estate, which at £14,490 is a little cheaper to buy – although with only 74bhp, performance is lacklustre. But whichever version of the Fabia you choose, you can take confidence from the brand’s dealers ranking seventh overall in our Driver Power 2013 owner satisfaction survey – and number one for value.

This model of Fabia is a few years old now and it’s beginning to show its age. With a tall body and narrow track, the hatchback’s proportions are a little awkward – and the Estate makes this worse with its extra rear overhang. Still, the Fabia has some unique styling features, such as classy black A-pillars and a floating roofline effect, while the SE looks more upmarket than the Dacia, due to its 15-inch alloys and chrome grille lip.The cabin is well put together and clearly laid out, plus the plastics, switchgear and fabrics all feel a step ahead of the Logan’s. There’s a tactile four-spoke steering wheel (with a leather rim for an extra £260) and a modern stereo, as well as standard air-con. However, unlike with the Dacia, you have to pay extra for cruise control and Bluetooth connectivity – so the SE-spec Skoda isn’t that well equipped. In short, it’s not fancy, but crucially it doesn’t feel flimsy, either.

Climb into the Fabia and it’s very clear that plenty of thought has been given to practicality throughout. There’s a handy double glovebox, decent-sized door pockets, twin cup-holders and a small tray for odds and ends. Plus, reach and height movement on the wheel and a height-adjustable driver’s seat make it quite easy to get comfortable. In the rear, there isn’t as much space as in the Dacia Logan MCV, yet there’s still enough legroom for a six-foot adult – although if you regularly carry three people in the back, it’s worth noting that Skoda will charge you £75 for a third rear headrest. But when it comes to ultimate capacity, the Skoda trails with the seats up. A 505-litre boot volume is respectable, yet the Logan offers 68 litres more, plus a longer load length and more space between the wheelarches. Still, the Skoda’s 60:40 rear seats fold easily and, thanks to tumbling cushions, you get a fully flat load floor. Plus, with 1,485-litre maximum capacity, the Fabia still offers a lot of boot space for a car of its size.

Skoda finished second only to Lexus in our Driver Power 2013 survey. The Fabia itself is a little dated after nearly seven years on sale, so it trailed the company’s newer offerings, such as the Superb and Yeti. It also shows its age when it comes to safety kit – stability control is optional and curtain airbags are £250. A space-saver spare wheel will cost you £65, while rear parking sensors add £285. The Fabia comes with a three-year/60,000-mile warranty as standard; this can be extended to four years/80,000 miles or five years/100,000 miles for £160 and £295 respectively.