Skoda's third-generation Fabia comes to the UK in estate form. But does it deliver for buyers? 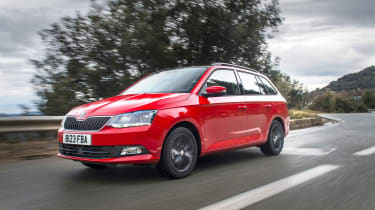 The Fabia Estate is even more of a capable all-rounder than the hatch, as there's no real compromise in terms of driving to counter the extra space. A high quality interior, strong equipment list and low running costs are also a bonus. We'd steer clear of the pricey 1.4 TDI unless you do big miles, as there's better value to be found lower down the range.

Supermini estates like this new Skoda Fabia Estate aren't too common these days. Renault and Peugeot won't be replacing the old Clio Sport Tourer and Peugeot 207 SW in the UK, and other than the arguably more budget-focused Dacia Logan MCV and ageing Seat Ibiza ST there isn't much else on offer. That means this third-generation Skoda Fabia estate is almost flying solo in its class.

Skoda has offered a more spacious Fabia since the first-gen model fifteen years ago, and this version is definitely a more grown-up affair than before, in both size and appearance. From the B-pillar forwards it's the spitting image of the latest hatch, but in profile it has the look of a shrunken Octavia Estate. It can be bought in bright paint schemes that help it stand out, but the deliberately boxy styling emphasises practicality over style. 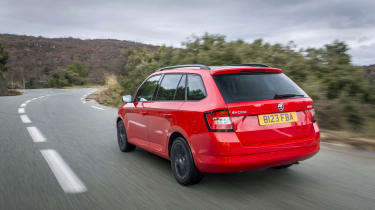 That's proven when you open up the rear hatch to find a huge 530-litre load space. That's 25 litres more than the old car, and significantly larger (with the seats up) than a Ford Focus estate, with a useful 1,395 litres once the seats are folded down.

The longer wheelbase (aided by the new MQB-based platform) also means generous leg and headroom even for six-footers in the back. It's impressive how Skoda can package all that into a relatively small footprint. Our car also came neat little touches, like a £65 'Simply Clever' package that adds useful stowage compartments around the cabin, and a handy bike carrier in the boot for £180.

Like the exterior, the cabin won't knock you senseless with design flair or plush materials, but it's solid, decently classy and is a lot more logically laid-out than some superminis. Look with intent and you'll spot where Skoda has reduced costs over its VW Polo sister car, though, with some cheaper materials. 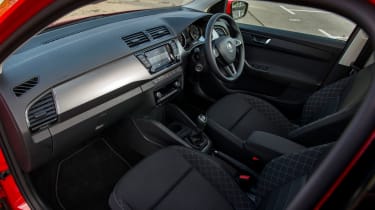 With a sizeable load bay over the rear axle you could expect a loss in dynamic ability compared to the hatch. But everyday driving you'll quickly forget you're in the load-lugger, and its only in hard cornering that you can feel a little extra body roll and weight transfer.

The ride is still composed and smooth over the worst our roads can throw at it, the steering is light yet accurate, visibility is good and it's a doddle to drive in any situation. There's no noticeable penalty in terms of wind noise either, and only a fraction more road roar from behind.

In fact the only intrusive noise we encountered came from under the bonnet. Our car came with the VW Group's familiar three-cylinder 1.4-litre TDI diesel, which produces a modest 89bhp but a healthy 230Nm of torque. It hustled the Fabia along at a decent speed, proving punchier than the figures suggest and managing over 60mpg in mixed driving. But it isn't the most refined unit out there and at idle, especially when cold, there's an unwelcome and rattly diesel din. It settles down once up to speed, however. 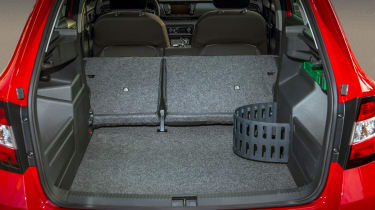 It's also a pity that Skoda is pushing the Fabia away from true affordability. The range starts at a reasonable £12,460, but our top-spec SE-L test car with a few small options costs a faintly startling £18,780 (£17,385 without the kit).

That's well into Octavia estate territory, despite the impressive kit tally on offer such as keyless go, climate control and the MirrorLink touchscreen infotainment system. We'd opt for the 1.2-litre TSI 90 turbo petrol instead, as it offers similar performance, is more refined, delivers decent economy and is £2,000 less spec-for-spec.