We test the new Dacia Logan MCV estate, which offers a large boot and a low starting price 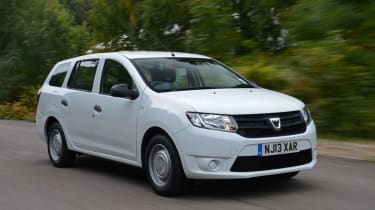 Dacia continues to appeal as a brand thanks to its simple formula of ultra-low prices and basic but dependable cars. The Dacia Logan MCV is another fine addition to the range for anyone after an affordable load-lugger that will get you from A to B. Still we would avoid the Access version. The 1.5-litre diesel is even cheaper to run, better to drive and a quieter cruiser, and only marginally more expensive too.

Budget brand Dacia has so far smashed the lowest price bracket of every new segment that it enters - from superminis to SUVs - and the new Dacia Logan MCV estate is no exception.

The price for this roomy family holdall starts from a scarcely believable £6,995 for the basic version ‘Access’ we test here. That makes the Logan more than £3,000 cheaper than any of its nearest rivals, and even the top spec Laureate models don't rise far beyond the starting price of most city cars.

‘MCV’ stands for maximum capacity vehicle and the Logan doesn’t disappoint on that front. You can squeeze nearly 600 litres of luggage into the wide, flat boot with the seats in place. Fold them down flat and this rises to an even more impressive 1,518 litres. No other car offers this kind of boot space for so little cash.

However, choosing the cheapest variant in the range does limit the engine choice, as it's only offered with a 1.2-litre petrol engine with a paltry power output of 74bhp. Predictably this makes for sluggish progress with 0-62mph taking a leisurely 14.5 seconds.

Get forceful with the throttle and this engine feels keen enough, as long as no one else is with you, but it gets very noisy above 4,500rpm and starts to struggle the instant you climb even a gentle slope. Fill the sizeable boot with anything weighty and this particular Logan MCV would be dangerously slow.

Happily, the rest of the dynamic package is better resolved. The hydraulic steering is a bit stiff and requires a fair amount of effort at low speeds, but once you're on the move it gives decent feedback and the weighting is fairly consistent. The five-speed gearbox has a solid, positive action and the brake pedal offers reassuringly consistent bite as well.

Approach a corner at speed and there is a noticeable amount of body roll, but also decent levels of grip. The ride is set up for comfort and although it can get a little bouncy on very bumpy roads the Dacia smoothes over large imperfections well. Road and wind noise do both become an issue at higher speeds though.

The cabin will be familiar to any Sandero owner as it’s virtually identical but don’t spend too much time looking for toys to play with. Even the Kenwood stereo in our test car doesn't make the standard specifications list – it's an optional extra. At least safety kit such as ESP comes fitted as standard in the UK, but strangely rear headrests do not – which will definitely make family car buyers think twice.

Hard, sturdy grey plastics cover every surface in the cabin and the plastic wheel and gear lever do feel particularly rough to the touch. The mechanicals though should be extremely robust and the Logan MCV comes with the option of a seven-year or 100k mile warranty for just £850 – giving a lot more peace of mind to buyers than with a used car gamble.