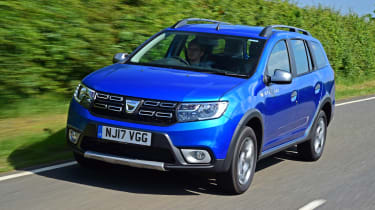 The Dacia Logan MCV Stepway can’t match the likes of the Octavia Scout and Golf Alltrack in interior finish, but it trumps them both on value. This is a well built, rugged and practical car that now has extra kerb appeal for those wanting a pseudo-off-roader look and not caring about all-terrain ability. The diesel isn’t the most refined unit and it costs more than the petrol, but its extra torque will come in handy if you do manage to fill the Logan MCV’s sizeable boot.

Dacia’s reputation for no-frills motoring is maturing nicely, allowing the Renault-owned brand to add a few niche models to its all-too-sensible line-up.

The latest arrival is the Logan MCV Stepway, the firm’s take on a jacked-up family estate car. It’s a cheaper alternative to the likes of the Skoda Octavia Scout and Volkswagen Golf Estate Alltrack.

The Logan MCV is the second Stepway in the range. The first version now accounts for nearly 60 per cent of all Sandero sales in the UK, so Dacia has high hopes for this model. 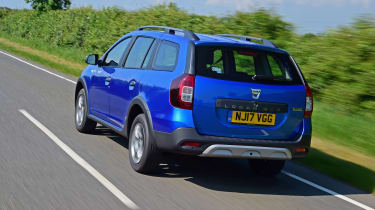 As ever with Dacia, the headline feature is the starting price. All cars come in high-spec Lauréate trim, and the petrol version starts at £11,495, making it less than half the price of the entry-level Octavia Scout. However, where rivals come with four-wheel drive, this is more a makeover – the Logan is two-wheel drive only. These cars feature electric mirrors, rear parking sensors, cruise control and a seven-inch touchscreen infotainment system with built-in sat-nav and Bluetooth as standard equipment. However, we’re driving the higher-torque diesel here, which is priced from £13,095.

Another big feature is the practicality on offer. The Logan has a 573-litre boot, which isn’t too far off the load bays available in the VW Group’s small estates. The Octavia Estate has 610 litres, while the Golf Estate and SEAT Leon ST offer 605 litres and 587 litres respectively. But pound for pound, the Logan’s boot is acceptable, and folding the seats flat boosts the capacity to 1,518 litres.

The Stepway version benefits from the standard Logan’s recent facelift. Dacia’s latest look, with a revised front grille and air vents, plus new headlamps with daytime running lights, injects a little extra style into what is a very cheap car, but, of course, the Stepway’s attraction is the jacked-up ride height and rugged black plastic cladding.

Additionally, you’ll get satin-finish roof bars, plus front and rear skidplates and 16-inch ‘Flexwheel’ fake alloys. Below the skin, though, the oily bits are the same as the standard Logan’s.

In the cabin, the car again benefits from recent Dacia updates, with a new steering wheel and satin-finish centre console, while special Stepway-embroided seats make the cut. But there’s still plenty to remind you that this is a cheap car. Many of the interior plastics are hard and scratchy, and the graphics on the satellite navigation system feel pretty outdated. On the plus side, at least it does all seem well built.

On the move, the Logan MCV Stepway certainly doesn’t feel carelessly set up; the relatively modest 16-inch wheel size helps it to ride well on UK roads, and it’s a comfortable cruiser. 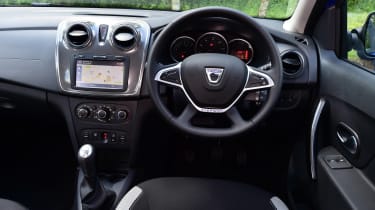 The 1.5-litre four-cylinder diesel has only 89bhp on tap but its 220Nm of torque means that you shouldn’t have to work it too hard, even if you’re making heavy use of the estate’s load bay. That’s just as well, really, because while low-rev refinement is acceptable, stretching the engine does expose some raw edges.

With a car like this, however, how cheap it is to run is arguably more important than how it feels. An ECO engine mode and stop/start help to deliver an impressive official fuel economy of 72.4mpg, while insurance bills should be low, too, thanks to a group nine rating.