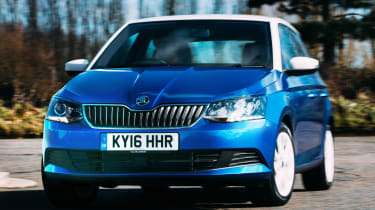 The Colour Edition helps the Fabia stand out from the crowd, while the additional kit for just £540 makes it decent value. It’s still the same accomplished Skoda we know, too, although the 1.2 TSI engine is a better all-rounder. The cheap insurance and bold style make it a winner for young buyers as well.

Skoda has gained a reputation for building sensible, practical and good-value cars – but distinctive ones? Not really.

Now, to appeal to the more youthful end of the market, the Fabia supermini range has gained vibrant new Colour Editions.

Buyers have the choice of a white, green, blue or black body, with contrasting black or white roof, wing mirrors and wheels. Our blue and white test car may not be to everyone’s taste, but there’s no doubting it helps the smart yet understated supermini stand out. Compared with the straight-laced Volkswagen Polo, it’s refreshingly different and colourful, but not too over the top. 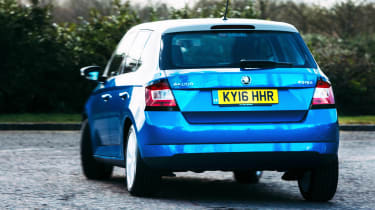 The Colour Edition Fabia is based on mid-spec SE trim, and on top of that car’s rear parking sensors, DAB radio and Bluetooth, it brings LED running lights, cruise control and 16-inch alloy wheels for £540 extra. Sat-nav is a reasonable £500 option, too.

As with every Fabia, the dash is easy on the eye, solid and simply laid-out, although you won’t find any soft-touch plastics. There’s also plenty of space for four adults and a roomy 330-litre boot.

Colour Editions can be ordered with either the 74bhp 1.0-litre or 89bhp 1.2 TSI petrol engines. We tried the former, and, while it’s pretty frugal, it can only be described as exceptionally slow. 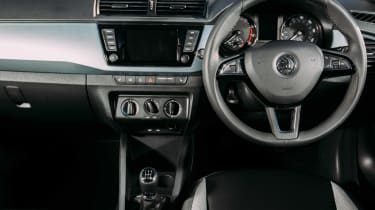 Building momentum at motorway speeds is a struggle, so you won’t be doing much overtaking. At least it’s smooth, nippy and refined around town, plus keeping it up to speed is accompanied by the familiar three-cylinder rumble. Crucially for young buyers, the car is very cheap to insure, sitting right down in group three.

As you’d expect, the composed ride and handling of the regular Fabia is unchanged. A Ford Fiesta is more engaging, but the Skoda’s steering is direct, with plenty of grip and well contained body roll. It’s great around town, too, with excellent all-round visibility and slick controls. Road noise isn’t as well isolated as in a Polo, though.