Can the new Skoda Karoq Scout recreate the appeal of its quirky predecessor, the Yeti? 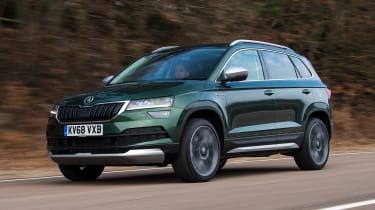 The Skoda Karoq Scout, like the rest of the range, is among the best all round family cars on the market. Practical, easy to live with and impressive to drive, there’s very little to fault. The question you have to ask yourself is how much you really need four-wheel drive and want that tougher styling. Front-driven Karoqs are cheaper to run and can cost thousands less to buy while the Scout will be little better off-road than a standard 4x4 model. Unless you really value the Scout’s rugged visuals, the very best the Karoq has to offer is found elsewhere in the range.

The Skoda Karoq jumped straight towards the top of our favourite family crossover list when it hit the market towards the end of 2017. Some, however, found it a shame that Skoda’s latest offering in the compact SUV class had lost the quirky, chunky style that made its predecessor, the Yeti, so appealing.

But now the Karoq has been given the Scout treatment: off-road-inspired modifications that have already graced the Octavia Estate and Kodiaq. So does the new trim level recover some of the Yeti’s appeal?

The Karoq Scout gets a host of design details inside and out that set it apart from the rest of the range. On the outside, side sills and faux scuff plates on the lower edges of the bumpers lend a more rough-and-ready appearance, the door mirrors get a contrasting silver finish, and there’s special ‘Scout’ badging on the front wings. 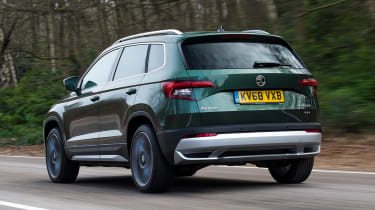 Inside, the smart cabin gets a new upholstery design set off with brown panels on seats that have matching stitching and Scout logos, and wood trim for the door inserts. It all comes together to produce arguably the most appealing look for a Karoq yet.

The Scout sits towards the top of the range, and like-for-like costs roughly £2,000 more than the SE L. Still, the 19-inch wheels, panoramic sunroof, electric tailgate, aluminium pedals and rough-road package (a few protective underbody panels) that come standard on the Scout would add £2,395 to the SE L’s list price alone.

Infotainment functions are catered for by the excellent 8-inch touchscreen navigation system complete with Apple CarPlay and Android Auto (a larger 9.2-inch unit is optional). Towards the back, there’s a huge boot, and the Scout features the clever VarioFlex rear seats as standard: they slide, recline, fold, and can be removed altogether. If you don’t need to carry five, it’s possible to take out the middle seat, allowing for two outer chairs to slide inwards for extra shoulder room. 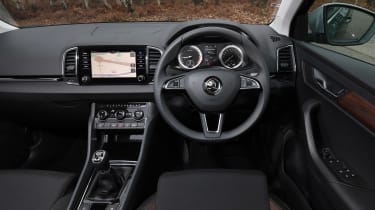 All pleasant enough so far, but those looking for true off-road aspirations might be disappointed by the Scout. The ride height remains the same as any other Karoq, and the tyres are very much designed with road use in mind. If off-roading is the number one priority for your family crossover, the Jeep Compass in Trailhawk trim will prove much more capable.

But the reality is that most people don’t tackle mountain trails on the average supermarket run - even if they want to look like they could. As such, the Karoq’s four-wheel drive system will be more than adequate, to the point that most people won’t see a benefit unless accelerating hard out of a tight junction or when traipsing across a muddy field.

The fact that there’s no difference mechanically from the rest of the 4x4 Karoq range means that it feels just the same to drive. Very pleasant, in other words: the weighting of the steering, brake pedal, clutch and gearbox are all very well matched to one another so you immediately feel at ease. The suspension setup strikes a sweet balance between comfort and agility: firmer than the Peugeot 3008 but more supple than the Karoq’s sister car, the SEAT Ateca.

There are two engines to choose from, both of which produce 148bhp: a 1.5-litre turbocharged petrol and the 2.0-litre diesel driven here. The diesel is smooth, refined and gives more than adequate performance. In Scout trim, it’s only offered with a precise six-speed manual gearbox, while petrol buyers are limited to a seven-speed DSG auto. The diesel is claimed to achieve around 44mpg (depending on fitted options) on the WLTP testing system, and our time on the road suggests this is completely achievable in the real world.

So the Karoq Scout is a very likeable crossover, but while the extra options offer decent value for money against a comparable SE L, the 4x4-only powertrains make it a pricey punt in the Karoq range. Front-wheel drive equivalents of both petrol and diesel variants cost £1,560 and £1,810 less respectively throughout the Karoq lineup, so a front-wheel drive Karoq SE L 2.0 TDI costs £3,955 less than a four-wheel drive Scout. In other words, if you can do without the 4x4 system and (admittedly good value) extras you can save £75 per month by opting for an SE L 2.0 TDI on a like-for-like four year PCP finance deal.