The Skoda Octavia vRS applies the maker's proven value-for-money philosophy to a family-friendly performance car, and it works very well 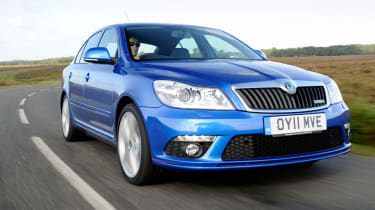 The Skoda Octavia vRS doesn't have the badge or upmarket image of a Golf GTI, but it has almost everything else that makes the VW such a capable and popular hot hatch: the same chassis and the same 2.0 TFSI turbo engine. There's also a choice of traditional six-speed manual or DSG dual-clutch gearboxes. Plus, there's a diesel version of the Skoda available, making it one of the most cost-effective performance cars you can buy. And along with the exciting performance, you get the same practicality and high equipment levels that make the regular Octavia such a good buy.

With a 197bhp turbocharged engine under the bonnet, the petrol Octavia vRS is an eager performer by anyone's standards. The 0-60mph sprint is completed in 7.2 seconds, and thanks to the sports suspension and accomplished chassis, it's entertaining to fling around corners, too. The diesel engine is slightly slower against the clock, taking 8.3 seconds to do 0-60mph, but you won't really notice the difference in real-world driving, and the fuel economy savings offered by the 2.0-litre TDI are very hard to ignore. Purists will still prefer the sound and responses of the petrol engine, however.

This is where the Octavia vRS really shines. Whereas most performance cars require you to pay a significant price for their capabilities, the Skoda won't cost that much more than a regular family car to run. The 2.0-litre petrol returns a claimed 38mpg with a manual gearbox (37mpg with DSG), while the diesel will do 50mpg (47mpg with DSG). As both engines are turbocharged, their CO2 emmissions are reasonable, too. Insurance won't be as expensive as it is for their more desirable VW counterparts, either, and residual values are very strong.

One area where the Skoda Octavia vRS falls down against its sister cars is looks: it can't match the upmarket class of the VW Golf GTI or the Latin flair of the SEAT Leon Cupra R. But it's still a handsome enough car in its own right, and vRS trim adds a tidy rear spoiler, a deeper front bumper and large 17-inch alloy wheels. This car also rides lower than more pedestrian Octavia models courtesy of special sports suspension. Inside, you get sporty black and silver-trimmed semi-bucket seats, aluminium-effect trim on the dash and a three-spoke leather steering wheel – and everything is finished to the same high quality you'd get in a Golf.

The regular Skoda Octavia is one of the most practical family cars money can buy, and it's no different in vRS form. Up front, you get a dashboard cubby, deep door pockets and a large central storage bin. Rear-seat passengers have lots of room, and then there's the 560-litre boot – bigger than that offered by some cars in the class above. Folding rear seats allow that space to be increased further, so there's not a lot the Octavia vRS can't carry. If you're looking to mix performance with practicality, there really is no better choice at this price.

The Skoda Octavia finished fourth overall in the 2012 Driver Power survey, and Skoda itself topped the manufacturer rankings, so customers in general are extremely satisfied with these cars. The only real issue to worry about is problems with the diesel engine's particulate filter, which can become blocked on cars that aren't driven for long distances on a regular basis. As the Octavia is an older design than some of its competition (it was introduced in 2004), it only scores four out of five on the Euro NCAP crash test. ESP, traction control and a full complement of airbags are standard equipment, however.