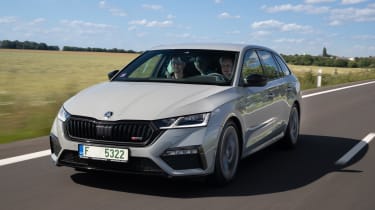 This ride showcased that Skoda is sticking with what it knows best when it comes to the vRS. Rivals have moved on in terms of performance and price, but the addition of a plug-in option will open up the car to a new breed of customers. We can’t wait to try it.

Czech Republic, Mlada Boleslav. It’s the location where Skoda was founded 125 years ago, and today it’s where we meet the company’s latest, and arguably most controversial model, the new Octavia vRS.

For the first time, Skoda will make the vRS available with a plug-in hybrid powertrain, alongside petrol and diesel options. It’s a big shift for a car which has long been a huge success story for Skoda: one in five Octavias sold in the UK is a vRS.

To see how the firm’s Volkswagen Golf GTI rival is shaping up, we’ve been for a passenger ride with the man in charge of the car’s development, Skoda’s Board Member for technical development, Christian Strube.

Despite being an engineer, the first thing Strube is keen to explain is the design. The vRS’s overall look is subtle, but it has just enough design flourishes to mark it out as the flagship performance car: there’s a glossy black grille, enlarged air intakes and chrome-tipped exhausts. 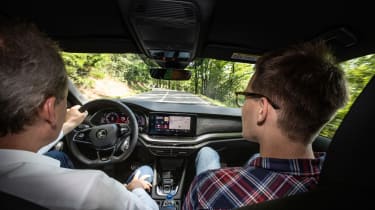 We jump in the passenger seat alongside Strube, and immediately notice that the interior maintains the understated look that the vRS model has cultivated over the past 20 years. The elegant two-spoke wheel from the standard Octavia has made way for a racier three-spoke rim, while red inlays, contrasting stitching, and supportive but comfortable sports seats also feature.

The model we’re in here is the 2.0-litre petrol version – we’ll have to wait until a later date to try the plug-in version. As it stands, the four-cylinder turbo develops 242bhp, which enables a 0-62mph time of 6.7 seconds, according to Skoda, which is quick, but not as rapid as some rivals.

The roads around Skoda’s HQ are far from perfect; the beaten up surfaces aren’t too dissimilar from our roads in the UK, but the vRS doesn’t make a meal out of them. Even with its 15mm lower suspension, 19-inch wheels and standard springs and dampers (an adaptive set-up will be offered), the ride feels controlled and comfortable. Just how a Skoda should be.

As we approach the edge of the town, Strube moves the twin-clutch DSG box from D to S and flicks down a couple of ratios using the steering wheel paddles. The vRS obeys every command without hesitation, and a surge of torque (370Nm is available) propels us forwards at a decent pace. 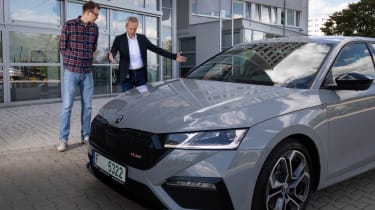 The vRS feels quick enough from the passenger seat, but doesn’t sound exciting. There’s a lack of theatrics and noise, but Strube assures us his team are working on a sound actuator and a sports exhaust system to add a little more drama. If they’re optional extras, they’ll be worth adding.

Without being at the wheel, there’s not an awful lot to report about the handling, but what we can tell you is that Skoda appears to have struck a fine balance between body control and comfort.

Questions still hang over the ability of the plug-in vRS. All we know so far is that the 1.4-litre engine and electric motor combine to develop the same 242bhp as the petrol car. We’ll have to wait and see if the weight of the drive system blunts its performance.