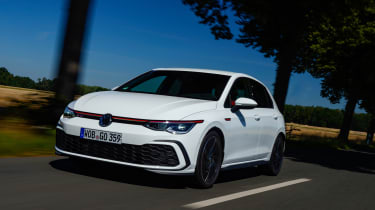 Essentially, the base Golf GTI has become the previous Golf GTI Performance with some added refinement, a new look inside and out and new technology - but that’s not a bad thing at all. Buyers expecting a total transformation for the Mk8 Golf GTI won’t find one, but it’s still a car of immense cross country pace and comfort. Perhaps the sticking point will be the price, which will inevitably creep up into mid £30k territory and possibly beyond.

This is the latest installment of a 44-year strong genre-defining experience. It’s the all-new Golf GTI, back for an eighth-generation and still perhaps the most iconic version of Volkswagen’s most iconic modern model.

Once again it’s an exercise in evolution rather than sheer engineering brute force. The Golf GTI is not VW’s engineers taking the firm’s popular hatchback to the extremes. It’s instead a judged entry, providing power, performance and front-wheel-drive economy in a package that’s more pliant and affordable than the range-topping Golf R.

As such, the new Golf GTI uses the same platform as its predecessor, and the same engine too - the VW Group’s well used 2.0-litre four-cylinder turbocharged petrol engine dubbed EA 888. Power stands at 242bhp with 370Nm torque, meaning the ‘standard’ Golf GTI now develops as much power as the Performance pack version of the last one. However, that’s a figure shaded by many competitors - the Hyundai i30 N, Ford Focus ST, Renault Megane RS and the new Mercedes-AMG A 35 can all muster more.

The MQB underpinnings of the GTI are well travelled, but the suspension system and adaptive dampers are all new. Volkswagen has trimmed a little extra weight off the suspension with the usage of new aluminium subframes, and the spring rates have been upped front and rear.

It all adds up to a driving experience that majors on improving refinement and handling rather than upping the pace. Taken from a base level of performance, the 6.3 seconds it takes to get to 62mph from standstill is no real change over the Performance version of the last GTI. Mild updates to the engine alter its characteristics, however. It’s keener to rev out to its 6,500rpm redline, and still surges forward with rewarding linearity. 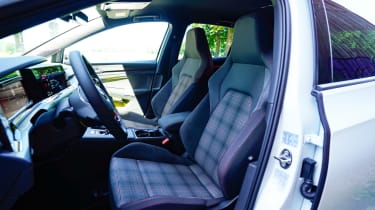 But the exhaust note takes a hit due to new particulate filters and a larger catalytic converter, and the sound actuator in its place fails to address the flatter soundtrack. The DSG transmission’s oft-surfacing hesitancy can creep in too, if you ask too much of the slick new gear selector at low speeds, but a six-speed manual option is coming for those who’d prefer three pedals.

What captures you most about this new GTI is the level of grip and reduction in understeer - the difference made by having the front locking differential from the last Golf TCR as standard. Traction in high-speed corners has improved massively, but it’s not just the work of the differential - it’s also down to the new Vehicle Dynamics Manager system that makes its debut in the GTI.

This electronic system controls the differential and the new adaptive dampers in harmony, adjusting them up to 200 times a second to strike the perfect balance between comfort and control. It’s a quiet technological leap forward for the GTI.

The steering system is as has been the case on hot MQB cars for a while now - direct and pleasing to point into corners but absent of proper road feel. But in combination with the suspension and engine, it forms the basis of a hot hatch package that’s pliant enough for long-distance motorway drives, and pacey enough to entertain on a B-road. Eco, Comfort, Sport and Individual drive modes can be flicked through at ease, allowing the driver to prioritise refinement and light controls over stronger throttle inputs and sturdier steering, and vice-versa.

On the outside, the usual GTI caveats apply. A sporty bodykit is fitted to the latest Golf’s shape with honeycomb lower grilles and a red GTI pinstripe at the front, wheels ranging from 17 to 19-inches are found down the sides, while around the back the hatch lid is topped by a subtle spoiler, and a rear diffuser with dual-exit exhausts is equipped. LED headlights are standard kit too. 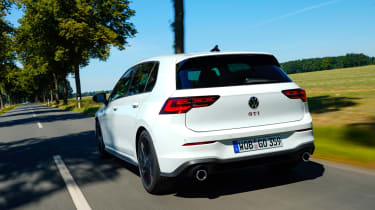 It’s a similar story on the inside, where a mild GTI makeover has been applied to the new-generation dashboard and infotainment. The digital instrument panel gets GTI graphics, Red flashes are applied alongside a new honeycomb motif on the dashboard and doors. there’s a GTI emblazoned sports steering wheel, the tartan-trimmed sports seats feature integrated headrests for the first time, heightening the sense of occasion, and steel pedals round off the look.

The new-generation infotainment system is presented neatly, 8.25-inches by default but upped to 10-inches on the options list. However, as crisp as it may be, it’s not the most straightforward operating system, relying on touch-sensitive buttons for inputs and with a dizzying number of menus for simple operations. It will take some owners some getting used to.