The all-new Skoda Octavia hatch is bigger and cheaper than the Volkswagen Golf, but is it better? 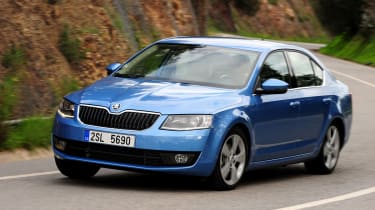 The new Octavia will provide the VW Golf with a big challenge – it’s a great car. It majors on value and space, with a stylish and well made interior. Ultimately, it’s not quite as good as the Golf dynamically, but it’s close and it’s better value. It may lack the Golf’s cache, but for an increasing number of Skoda buyers, that doesn’t (and shouldn’t) matter much at all.

Skoda is on a roll at the moment. Sales were up nearly 20 per cent in 2012, the Skoda Citigo is the current Auto Express Car of the Year and Skoda dominates the top of our Driver Power customer satisfaction survey. So the new Octavia (which uses much of the tech from the brilliant new Volkswagen Golf and is bigger, yet cheaper than the VW) has to be a winner, doesn’t it?

The price advantage isn’t what it once was, though. The entry-level (and hugely tempting) 1.2 TSI S model is generously equipped, but only undercuts the Golf by a few hundred pounds. That theme continues all the way up the Octavia range – more kit for a bit less cash.

That range isn’t especially broad, with only 1.2 and 1.4-litre turbocharged petrol engines or 1.6 and 2.0-litre diesels to choose from. Still, that should be enough for most - at least until the hot 220bhp RS turns up in the summer.

The model we’re testing here, the big-selling 1.6 TDI model in top Elegance trim, rolls in at a sizeable £21,090. Admittedly, most buyers will (and should) go for the S trim level, which comes with alloys, leather steering wheel, DAB radio and Bluetooth, plus a host of safety kit for £18,040.

That’s not bad for a car that just ducks under the 100g/km mark so is free from road tax, a tempting company car choice and has a claimed average fuel consumption of 74.3mpg. The equivalent Golf costs £19,565, also emits just 99g/km of CO2 but doesn’t get anywhere near the same level of equipment.

However, the Octavia doesn’t quite get the level of refinement the Golf gets. The engine combines a breathiness with some traditional diesel growling, and neither of which seem to die away. There’s more mechanical noise from the suspension and more road noise, too. Not that it’s noisy, just that the goalposts have been moved so far by the Mk7 Golf.

And that pretty much sums up the Octavia. On its own, it’s a brilliant car. But measured up against the Golf, it’s about 10 per cent off the pace.

Of course, there are some big benefits: space for one - an enormous 590-litre boot and masses of rear legroom make it a class topper on that score. Four large adults will be positively swimming in space, while a fifth person will be comfy enough, even if their feet are splayed either side of the transmission tunnel.

And Skoda has gone to town with clever practicality features, from a parcel shelf that can be stored neatly behind the back seats to an ice scraper that lives inside the fuel filler cap. It doubles as a magnifying glass, too – Skoda clearly knows its audience.

Using the same clever MQB platform as the Golf, you’d expect the Octavia to ride comfortably and generally it does. Yes, it’s a little firmer than a Golf, but it won’t upset anyone. Likewise, the handling is unexciting: secure and surefooted, but not especially communicative. The steering, in particular, could do with more feedback – this isn’t a car for keen drivers. However, there’s a decent amount of power – don’t go thinking a 1.6-litre diesel won’t be enough in this sizeable small hatch, as there’s plenty of poke on offer.

Skoda’s strengths are more about value (big tick), space (another big tick) and quality (yup, same again). The interior style is a step up from other members of the family and a whole lot more exciting to look at than the outside of the car.

Every model gets a touchscreen system with a minimum of five inches, while the dash and door tops are covered in nice, squishy plastics. Only some of the plastics between the front seats are harder, as is the glovebox lid. But even they are a cut above the class norm and can show the likes of Kia and Hyundai a thing or two.

What a shame, then, that the outside doesn’t look more inspiring. It's smart, conservative and unlikely to offend, but unlikely to get you glancing back over your shoulder at it either.

There’s some nice detailing, like the ‘fin’ at the back of the rear doors that kicks up into the window line and the strakes in the headlamp units that follow on from those in the new Skoda family grille. These details are too subtle to provide much of a talking point, though.

Skoda buyers love to talk, too, and one thing that’s for sure is they tend to be a very satisfied bunch, topping our Driver Power survey for the past few years. This new Octavia shows no signs of upsetting that particular apple cart.