No fireworks from the engine line-up, but the Skoda Rapid is a reasonable all-rounder 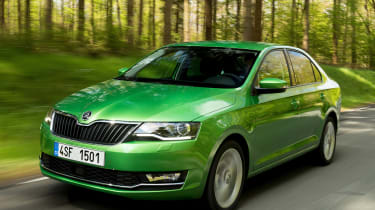 All Skoda Rapid models have modern engines, but the lower-powered versions can feel a little sluggish. However, the car's low kerbweight means it's not much of a hardship.

Washboard roads and harsher bumps or potholes still give a high-frequency patter through the suspension, although the dampers just shave the edge off bigger bumps well. On the motorway the Skoda feels relaxed, while the compromise when it comes to ride quality on country roads helps a little on twisty roads. It won’t set your pulse racing, and the steering is lifeless, but it's not bad considering the budget car roots. 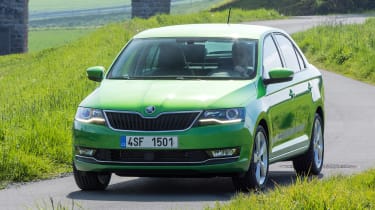 The Skoda Rapid is available with a choice of small petrol and diesel engines. The smallest is a three-cylinder 1.0-litre petrol TSI unit with 94bhp, which takes a sedate 11 seconds on the sprint to 62mph but can still manage a 116mph maximum. A 108bhp version of the same engine drops the acceleration time down to 9.8 seconds, but it feels faster than the numbers suggest in the real world.

Moving onto the diesels, the line-up kicks off with a three-cylinder 1.4 litre TDI boasting 89bhp that’s available with manual or the DSG gearbox. The manual gives you 0-62mph in 11.7 seconds, and a top speed of 115mph, while opting for DGS loses a tenth in acceleration.

The fastest diesel is the punchier 114bhp 1.6, which has a 0-62mph time of 10 seconds and a 125mph maximum. The 1.6 TDI is quite gruff at idle and gets even noisier if you extend it through the rev range, so it’s best to keep a lid on things and use the 250Nm of torque, where its in-gear performance is acceptable.