First report: Innovative family car has made a big impression in its short time with us. 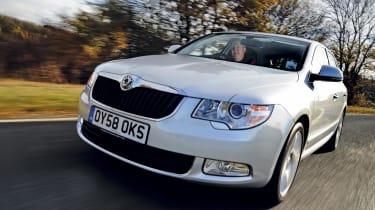 Superb by name and superb by nature – that’s the latest addition to the Auto Express long-term fleet. Skoda’s new family model really lives up to its badge, and has slotted into its role as load carrier and mobile test bed with ease.

In fact, it’s so spacious, the Czech firm could have called it the Roomster, had it not already used the name for its quirky supermini-MPV! Rear legroom is impressive, and I’ve already managed to fit a double mattress in the back with the seats folded.

It’s just as roomy up front – I am six foot three inches tall, yet I don’t have to slide the seat all the way back in the Superb. That’s very rare indeed!

The novel split tailgate is handy, too. While I think it still needs a bit of refining, it operates at the touch of a button on the remote keyfob, and gives you a choice of saloon or hatch openings.

Finding a comfortable driving position couldn’t be easier, as everything adjusts, while I’m a big fan of the centre storage box lid, which doubles up as a driver’s armrest. I’ve also been grateful for the heated seats in the recent cold snap. On the move, the Superb is just as rewarding, with great ride comfort and sharp handling. It’s even better on long journeys, eating up the miles while sipping diesel at a rate of 45.7mpg. My 80-mile daily commute has never been so relaxed and, despite the generous amount of room inside, it never feels like a big car.

Elegance trim brings a sat-nav and sound system with built-in Bluetooth. Trouble is, it links to few phones other than Nokias – and as a Blackberry user, I’ve been forced to take calls via TomTom’s excellent 940 LIVE portable device instead.

Indeed, testing numerous sat-navs may have triggered our only problem so far – as the fuse for the two centre console sockets failed. This was fixed while we waited at Vindis Skoda in Cambridge.

That minor problem aside, this long-termer is superb – in every possible way.

I know why Kim has been bowled over by the Superb – the car had exactly the same effect on me when we first tested it in Issue 1,033. And while the clever split tailgate will steal all the headlines, there’s more to the Skoda than its bootlid. The flagship’s looks and size won’t suit all tastes, but I defy anyone not to be impressed by its huge cabin, excellent road manners and impeccable refinement. It’s arguably the best all-rounder on our entire long-term fleet.