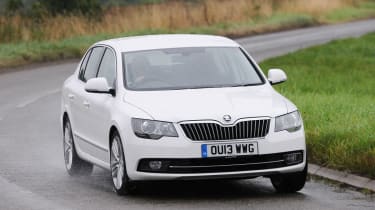 The Skoda Superb is a great way for families to get into a high-quality VW Group product without paying premium prices for an Audi or VW-badged car. It gets better too, since the Superb comes with loads of standard equipment and is even more practical than its siblings from other manufacturers.

Skoda has been selling more and more cars in recent years and it's models like the Superb that really show the reason for this sales growth. The Superb is quite simply one of the best big family cars you can buy, thanks to its great range of engines, smart interior, high levels of passenger comfort and solid build quality. There's no upmarket logo on the bonnet but the Skoda Superb still feels like a premium car.

The Superb is the largest Skoda you can buy at the moment, and so practicality is a real strong point. The Superb name is taken from a car produced from 1934, which featured a V8 engine and all-wheel drive - quite different to the front- or four-wheel-drive modern version which uses a range of small petrol and diesel engines.

A facelift in 2013 added the new Skoda family face, as well as new engine options with better fuel economy and lower emissions. There are four specifications to choose from (S, SE, Elegance and Laurin & Klement), with efficient GreenLine version of all but the top-spec cars.

The 138bhp 2.0 TDI feels responsive, but you’ll get more performance from the 168bhp version of the same engine, which costs an extra £930. The Superb isn't as good to drive as the rival Mazda 6 and feels less settled on the road. In corners there’s more body roll than the 6 and the controls aren’t as responsive. It doesn't feel big and heavy, though, and the steering is well weighted. Grip is pretty good too.

The Superb's long wheelbase and light controls mean it's an easy and comfortable car to drive every day. It's not that much more relaxed than the Mazda, though - the suspension fidgets over rough surfaces, while big bumps cause the car to shake.

The GreenLine version, which focuses on economy, now comes with a six-speed manual gearbox that improves cruising and also features a 15mm lower ride height to improve aerodynamic performance. The ride is quite firm, however.

The Skoda superb will retain about 42.8 per cent of its value after three years, which is better than the rival Mazda 6 for depreciation. It comes with plenty of standard equipment too, so it's a good-value car.

As with other Skodas, there's an eco-special GreenLine version of the Superb available. It uses a 1.6 TDI diesel engine and various aerodynamic and gearbox tweaks to deliver 67.3mpg fuel economy and very low 109g/km CO2 emissions - the same as the EfficientDynamics BMW 3 Series.

It is now available on each trim level rather than as a standalone model and comes with the same high level of kit so is better value than before. All diesel versions and the 1.4 TSI petrol (which manages to return 41.5mpg) now come with stop/start and braking energy recuperation as standard to help save fuel. Overall, we recommend the the 140bhp 2.0 TDI diesel, which returns 52.3mpg.

The Skoda Superb looks a little awkward thanks to the unusual roofline and the rival Vauxhall Insignia is a much more stylish choice. The updated 2013 model got a new front end which marks it out as a modern Skoda, and it keeps the simple, no-nonsense design. It's still not as good-looking as the smaller Octavia though.

The newest model gets a squared-off grille and lights up front, while the rear number plate has been moved from the bumper to between the revised tail-lights. It looks tidier than before, but we'd still go for the estate model if looks are important to you - it's just a better-proportioned car.

The interior is smart and functional, rather than stunning, and the recent facelift added a classy wood finish. Go for the Elegance model and you'll get leather seats, which give a more upmarket feel – especially on the spacious back bench.

On SE trim and above there is plenty of equipment as standard, while top-spec Laurin & Klement models feel suitably luxurious inside with plush leather heated seats, a TV tuner, panoramic glass sunroof (on the estate version) and an aluminium tracked partition system in the boot all as standard.

The Skoda Superb is a very practical family car. Its bootlid opening is fairly narrow but it also has a clever twin hatch. The simple system’s two buttons let you open the boot or also lift the hatch. It takes a second for the hatch function to engage, but the benefits are clear, with uncompromised access to the big boot.

The 595-litre capacity is impressive, and when you fold the Superb’s seats it frees up 1,700 litres. That's bigger than the Mazda 6 and Ford Mondeo. Unfortunately, the boot lip is high, the threshold wide and there’s a step in the floor when the seats are folded. There's no rear wiper either.

When it comes to space in the back seats, the Skoda is fantastic. There’s acres of legroom, while B-pillar vents provide fresh air. A centre console display shows the time and outdoor temperature, and an umbrella sits in one of the doors. Apart from that, the rear cabin majors on space more than luxury.

The Skoda Superb came second in the 2013 Driver Power customer satisfaction survey's top 150 cars, finishing behind the Skoda Yeti. It's a huge testament to the ownership experience and reliability of Skoda's cars, and it indicates that the Superb is likely to be completely dependable. The company as a whole topped the manufacturer's charts as well, so there really is no more satisfying car to own.

The engine range is tried and tested. It should be completely reliable and owners have also praised the Superb’s space, quality and reliability.

Euro NCAP gave the Superb five stars for safety – although it was tested back in 2009. The twin boot opening defaults to its saloon setting and a heavy-duty latch ensures that the hatch won’t open of its own accord in a smash.