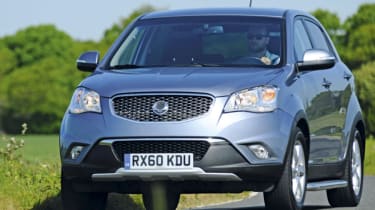 The Korando is a tentative step in the right direction for SsangYong. It’s quite good looking, spacious and very well equipped, but the driving dynamics and general cabin refinement still can’t compete with more cultured European rivals. Despite its shortcomings, prices may start from as low as £16,500 for entry two-wheel-drive models. So, it does offer pretty good value for money, and that may be enough to tempt a small number of family buyers.

Back from the brink! Having successfully secured its financial future by signing a long-term deal with Indian manufacturer Mahindra, Korean firm SsangYong is returning to the UK with its first new model in four years – the Korando. And we’ve driven it.

This left-hand-drive version is one of the first to arrive on British shores, and should give an idea of whether the Korando has what it takes to compete in this sector against the likes of the Nissan Qashqai and Hyundai ix35.

The styling certainly mirrors its rivals, so although the design is conservative, it’s handsome and well proportioned. At the very least, the chunky good looks are a welcome change for the brand that bought you the Rodius MPV.

The newcomer is set to go on sale here in July, with both two and four-wheel-drive variants on offer, but only one engine choice from launch – the 2.0-litre eXDi driven here. On paper, the diesel powerplant is one of the car’s strongest assets – with 173bhp and 360Nm of torque available, there’s plenty of in-gear punch, and although it’s not the cleanest oil-burner around, it does sneak below the 160g/km mark for CO2 – an important consideration for company car buyers.

However, in reality, the diesel unit is less successful – it’s intrusively noisy at most speeds, and power delivery comes in a single burst between 2,000rpm and 3,000rpm. Below this threshold, the Korando’s responses are sluggish, and the problem is compounded by a notchy, vague gearshift, which is a constant hindrance to making smooth progress.

This is the first SsangYong to feature a monocoque chassis, so you might expect its handling to be a strong point. In reality, the body pitches and rolls heavily into corners, and the ride is somehow bouncy and jarring at the same time. The ultra-light steering does make it easy to drive, but also makes committed cornering a real act of faith.

It does boast one of the longest wheelbases in the sector, which means that, despite being compact enough to park with ease, there’s loads of passenger room inside. The 486-litre boot is ample, while the reclining rear seats mean that getting comfortable in the back is straightforward.

The cabin, though, falls short of matching European standards. Some of the hard, scratchy plastics feel cheap, and the layout is a generation old, but it seems built to last. There’s also a high level of equipment as standard, including a sunroof and heated seats. Expect prices to start at around £17,000 when it goes on sale this summer.

Rival: Qashqai 2.0 dCi Nissan’s 2.0-litre diesel version of the popular crossover can’t match the Korando for ultimate power and torque, but it’s more refined. Plus, its civilised road manners make it worth the extra outlay. Even the cheapest version costs £19,395, but it does offer excellent residual values.