The SsangYong Korando offers lots of space, off-road looks and a decent price, but an outdated interior lets it down 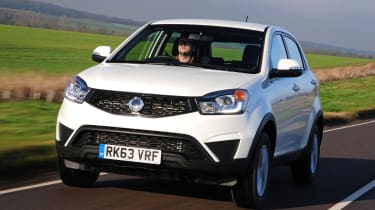 Some drivers with £15,000 to spend on a new crossover will find the fresh-faced Korando difficult to ignore, with its masses of space, great towing ability and rugged off-road looks. But we suspect more won’t be able to overlook the noisy and sluggish diesel, outdated interior and vague handling, and will be tempted by a more capable car instead.

With the likes of the Kia Sportage and Hyundai ix35 no longer the value choices they once were, and the Dacia Duster at the budget end of the market, there’s an opening somewhere in between. And the SsangYong Korando could be the car to fill that gap – especially now it’s had a smart mid-life facelift.

Key to this car’s appeal is its towing capacity, and SsangYong is keen to target caravan owners. So our 2.0-litre diesel’s two-tonne towing weight is arguably more important than its 147bhp power and 360Nm torque outputs.

But it’s not exactly subtle. The engine is noisy on start-up and when accelerating. Potter around at 30mph and the noise subsides, but try to match the quoted 9.9-second 0-62mph time, and you’ll know about it.

The engine does the car no favours on running costs, either. In our two-wheel-drive model, it emits 147g/km, meaning £140 a year road tax, and a claimed 47mpg economy. The 2WD Kia Sportage promises 135g/km and 54mpg.

It’s not as if the Korando’s handling compensates, either. The steering lacks precision and at times leaves you guessing at how much lock you need. Plus, the car tends to lurch into corners, even at moderate speeds, while the ride is fairly unforgiving, too.

All this is disappointing, as the newcomer looks much more stylish than the Duster, with the kind of sharp lines that’ll help it stand out in the crossover class. Climb inside, though, and this latest Korando stands out for all the wrong reasons. SsangYongs have long been criticised for their interior finish, and this criticism is still justified.

Although everything feels relatively solidly built, and the company has introduced some soft-touch materials as part of the redesign, too many of the other materials feel years behind those in rivals.