With an all-new SsangYong Korando still two years away, has a second facelift improved the current model? 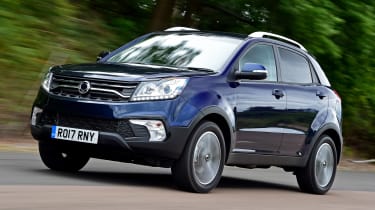 It’s going to be a long two years before SsangYong is able to reveal its all-new Korando, as this 2017 facelift does little to improve an already flawed product. With the highlights limited to a mildly revised face and new steering wheel, it’s still far from refined and remains poor to drive. It’s saved by a spacious cabin and decent towing torque, but more accomplished rivals still offer better value for money.

Among all the glitzy and glamorous SUVs we’ve seen so far this year, you’d be forgiven for missing the changes SsangYong has made to its good-value Korando 4x4. But to see whether the tweaks can finally bring the Korean SUV to the forefront, we’ve driven it in the UK for the first time.

The changes really are minor, though that’ll come as no real surprise as this is the second time SsangYong has given the Korando a nip-tuck since it launched in 2011. It’ll suffice as an attempt to keep the car fresh while the firm prepares an all-new model for 2019.

It’s blink-and-you’ll-miss-it stuff. The exterior design has been tweaked with the introduction of a new grille design and new headlamp units, while the fog lamps have also been replaced. 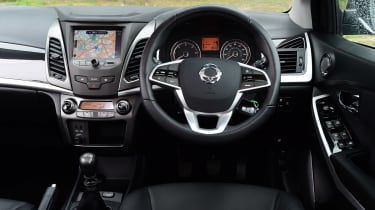 Cabin updates are even more restricted, limited only to a new steering wheel, which SsangYong claims is easier to use thanks to a rethink of how the multifunction buttons are laid out.

Everywhere else is as before. That means that the Korando is still powered by a 2.2-litre, 176bhp four-cylinder diesel engine mated to a six-speed manual gearbox as standard, with four-wheel-drive and an automatic gearbox reserved for range-topping models.

When the new car arrives before the end of the decade it’s likely to benefit from fresh, downsized diesel engines, but for now buyers must make do with the rattily 2.2-litre unit, which continues to set a low bar for refinement and fuel economy. Mated to the notchy gearshift, vague steering and an un-accomplished low speed ride, it means the current Korando is far from pleasant to drive.

It is punchy, though. With 176bhp on tap, dipping the throttle can coax out a respectable turn of pace, while the 400Nm of torque means that pound-for-pound the Korando still makes sense as a cheap tow car. In fact, SsangYong rates its towing capacity at an impressive two-tonnes, with a 750kg maximum for un-braked loads. For comparison, a new Renault Koleos 4x4 is limited to 1,650kg for braked trailers, despite costing almost £10,000 more to buy.

Inside, the cabin is covered in low quality hard plastic trim, although ELX cars like ours add a leather steering wheel and heated leather seats. A seven-inch touchscreen infotainment system with sat-nav is included on these cars, too. It’s a small and basic unit, but uses TomTom software for navigation and responds slickly to touch inputs, making it a welcome addition to the car’s basic interior.

Of course, being a SsangYong, value is the Korando’s headline feature. It’s a very cheap SUV for its size, space and power, with prices starting from only £17,000. A range topping ELX model with four-wheel drive costs £22,000, with all the bells and whistles.

However, the firm’s monthly PCP deals take the shine off the perceived value, with high fixed interest rates and a lack of a dealer deposit contributions meaning the Korando isn’t as cheap as you’d expect. Comparable, more efficient versions of the Nissan Qashqai are within reach depending on how much you can stump up for a deposit. 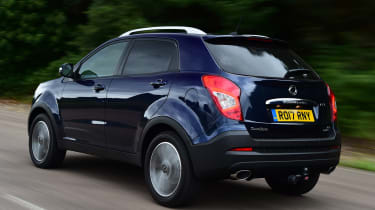 Click on the gallery above to see more of the facelifted SsangYong Korando...