We drive the new 1.5-litre petrol version of the SsangYong Korando SUV to see if it's the pick of the range 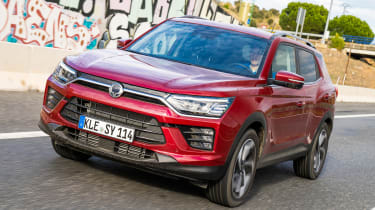 As it stands, the petrol is the pick of the new SsangYong Korando range. Unless you intend to make the most of the diesel’s extra towing capacity, the petrol model is the smoother, quieter engine, and our top choice. It’s cheaper, too, but with such a huge range of talented rivals in this class, the Korando doesn’t quite offer the best drive, performance, nor the best value for money – particularly on finance agreements.

When we tried the SsangYong Korando in the UK back in August, we were impressed with just how much it had improved over its predecessor. One or two doubts remained, however, most notably with a diesel engine that sounded gruff and felt lethargic.

But from December, there’s a new petrol engine joining the range – and we’ve been for an early drive. So is the new unit a better choice than the diesel, and is it enough to put the Korando on level terms with rivals like the Kia Sportage and Renault Kadjar?

Under the bonnet is a 1.5-litre turbocharged petrol unit which, like the diesel, is developed in-house. With 161bhp, it makes 27bhp more than the diesel, but its 280Nm maximum torque down by 44Nm. However, that figure is spread across a wider range: from 1,500 to 4,500rpm. 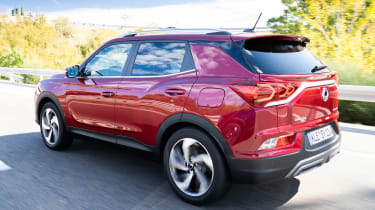 But while the diesel sounds unpleasant, the petrol is much smoother. SsangYong claims that engine vibration is better damped here than in the Sportage, and though we couldn’t confirm this without trying the pair back-to-back, it is impressively quiet – only piping up under hard acceleration.

Power delivery is smooth, too, but it never feels as quick as the power output suggests. Of course, outright speed is not the most vital quality for a family SUV, but performance feels sluggish, even when compared with less powerful rivals.

It’s not helped by the standard-fit manual gearbox. It’s quite obstructive in use, and the wide gate – particularly when reaching for fifth and sixth – means that it’s easy to fumble shifts. There’s a six-speed auto available for another £1,500, and while it is a little unresponsive, it shifts slickly. 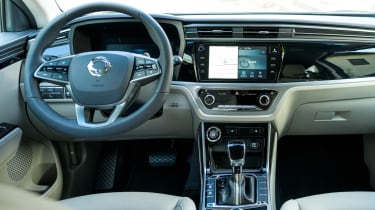 The tardy performance could be excused if it were frugal, but that appears not to be the case. While official figures are still to be certified, on our flat, quiet Spanish test route the Korando struggle to average an indicated 40mpg.

The Korando rarely feels exciting through a series of bends, but that’s not necessarily a bad thing. There is a Sport mode, which adds weight to the steering, but it doesn’t turn the Korando into a hot hatch. Body roll is pronounced and it doesn’t grip as strongly as some rivals.

For the most part though, the soft suspension set up feels reasonably relaxing. The exception is at low speeds, where the ride can fidget over less-than-perfect surfaces – particularly on the largest 19-inch alloy wheels.

As an ownership prospect, the Korando has plenty going for it. A five-star Euro NCAP score isn’t unusual in this segment, but the seven-year, 100,000 mile warranty is class-leading. It’s the same story when it comes to rear legroom, and the 551-litre boot is better than most rivals.

The petrol is offered in three trim levels. The ELX kicks off the range at £19,995; quite competitive considering the entry-level Kia Sportage costs £675 more. It is a little basic in terms of kit, but every model gets 17-inch alloy wheels, all-weather tyres, cruise control, Bluetooth connectivity, plus auto lights and wipers.

A £3,000 jump to the Korando Ventura introduces even more desirable extras. Here, the alloys grow by an inch, and other add-ons include part-fabric/faux leather seats that are heated in the front. There are parking sensors all round, and a 10.25-inch infotainment screen that includes Apple CarPlay and Android Auto. 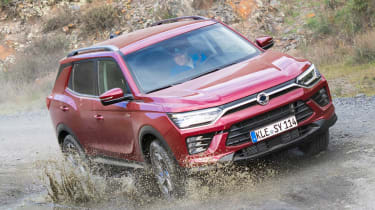 The Ultimate trim features 19-inch alloys, LED headlights, keyless entry, a glitzy 12.3-inch digital instrument display, leather seats, and a wide range of safety tech. The petrol range tops out at £27,995 with an Ultimate equipped with the automatic gearbox. Compare that with the diesel 4x4, which costs £4,000 more in the same trim, and the petrol makes quite a lot of sense.

However, nice though some of that tech is, the Ultimate doesn’t really represent strong value for money beside some rivals. Put down a £6k deposit on a Korando, on a three-year agreement, and you’ll be looking at spending £279 per month.

Match those terms to a Renault Kadjar GT Line and, thanks to a mix of a generous generous deposit contribution from Renault (at £2,860, it’s roughly £800 more than SsangYong offers), a lower rate of interest, and a lower purchase price to begin with, then the Kadjar comes to just £229 per month.