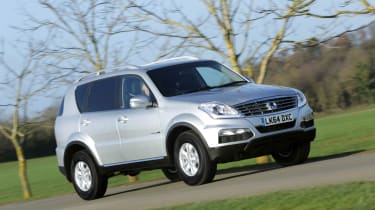 From the outside, there’s very little to distinguish the SsangYong Rexton CSE from a standard SUV. Look closely however and you’ll notice the blacked-out rear windows and missing rear seat that's common to all SUV-based commercial vehicles. In its place is a flat load area big enough to make the Rexton CSE a bona fide van.

SsangYong is tapping into a rather specific market with the Rexton CSE. It’s aimed at buyers who like the 4x4 go-anywhere ability of a large pick-up truck, but don’t want one – either because they don’t fancy a truck, or they need more security than an open load bed can offer.

Still, despite its passenger car roots, the Rexton CSE delivers a genuinely practical space, with a flat floor and storage where the rear seats would have been. It doesn’t offer the same access as a van, as the standard hinged doors remain instead of sliding side doors, but the lift-up tailgate is useful, and offers a better view out of the rear window than a pair of hinged doors when driving. 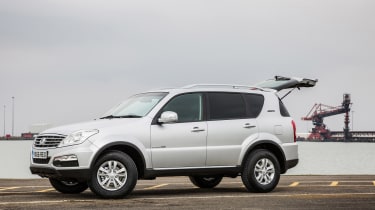 If you’re used to a Range Rover, the SsangYong Rexton CSE will likely feel a little Spartan inside, thanks to cheap materials and a generally dull design. On the road, too, it feels like a rather old-school 4x4, with a wallowy ride and lots of body lean. It compares favourably with pick-ups, though, and does benefit from a separate chassis that makes it genuinely good off-road.

SsangYong’s own 2.0-litre e-XDi engine is fitted in the Rexton CSE, and it’s much more smooth and refined than the old Mercedes unit previously fitted. There’s a choice of manual or slick seven-speed automatic gearboxes, too.

The arrival of the 2.0-litre e-XDi200 diesel engine in the Rexton van had a positive effect on running costs. With 38.1mpg average economy, the Rexton CSE is now competitive with rivals like Land Rover’s Discovery Commercial and the Mitsubishi Shogun, although these models do use 6-cylinder diesels and have a bit more grunt.

CO2 emissions are pegged at 184g/km in the manual models. Service intervals are every 12 months or 12,500 miles. 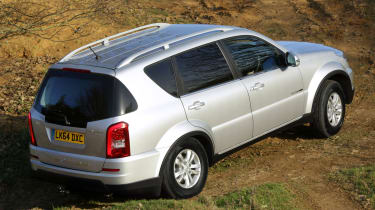 As it’s based on a passenger car, the Rexton benefits from the standard security systems that are factory fitted, so you get full remote central locking, speed sensitive door locks and an alarm with immobiliser. For this CS commercial version, SsangYong also offers a security bulkhead to separate the load space from the cabin.

The Rexton offers a similar load space to other 4x4 van conversions in that the rear doors are retained, which helps access to the front of the load area. The flat load floor is fitted on a platform in place of the rear seats and there’s a tailgate at the rear. The side doors aren’t wide enough for loading large objects so the tailgate is the main access point and the Rexton’s SUV design means the loading height is quite high. 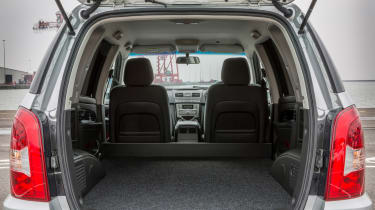 At 1,700mm the load floor is not particularly long, compared with a purpose-built small van such as the Citroen Berlingo (1,800mm), which offers some off-road capability using the PSA Grip Control system to improve traction in slippery and off-road conditions. The Berlingo also offers a taller and wider load space, reflected in the load volume, which is one third larger than the Rexton’s 2.2 cubic metre capacity. The Rexton’s payload is greater than the Berlingo XTR’s, though – 740kg to the Berlingo’s 661kg.

Alongside equivalent SUV-based 4x4 vans, the Rexton W CS is far more competitive in terms of load space. It’s also a capable towing vehicle and can manage a braked trailer up to 3,000kg. That’s a little down on the Mitsubishi Shogun and Land Rover Discovery commercial but still a good showing.

The respectable load space, combined with four-wheel drive, makes the Rexton a suitable vehicle for a range of uses, perhaps for utility, agriculture and forestry companies that need to access remote installations not readily accessible in a conventional van. A full-height bulkhead is standard equipment, featuring a solid-steel lower section and mesh upper so you can see out of the back. 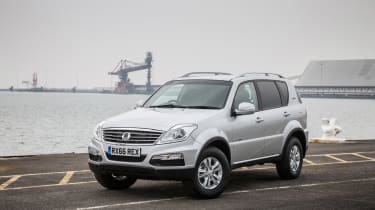 The Rexton van comes well stocked with safety features, including ESC electronic stability control with active rollover protection and hill descent control as standard. Front airbags and side airbags are standard fit too.

The Rexton is built on a rigid ladder frame chassis that’s just what you want in the rough stuff but makes the van feel a little unsophisticated on the road. There’s permanent four-wheel drive with a selectable low-range mode for serious off-roading that splits torque 50/50 between the front and rear axles.

The mix of independent front and live-axle rear suspension serve up a soft ride that’s comfy on good roads but can float around over undulations and gets crashy over big bumps.

It’s a similar story through the bends, where the Rexton CSE displays lots of body roll and its light, imprecise steering does little to inspire confidence.

On the plus side, SsangYong’s 2.0-litre e-XDi200 diesel engine is a solid unit. There’s 153bhp at 4,000rpm and 360Nm of torque from 1,500rpm all the way up to 3,000rpm. Although the Rexton van never feels fast, there’s plenty of flexibility in the middle of the rev range and refinement is also strong. 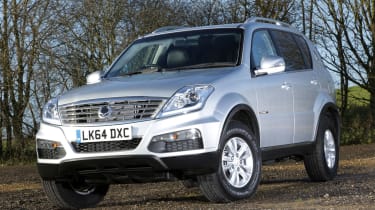 The optional 6-speed automatic gearbox is pretty good and if you adopt the easy-going driving style that the Rexton’s dynamic shortcomings tend to promote, the Mercedes-Benz T-Tronic auto is probably worth the extra outlay.

The Rexton CS van’s cabin is lifted straight from the passenger car version, so it has some more adventurous trim finishes than we’re used to seeing in purpose-built vans. It’s not the last word in quality and the layout feels slightly dated but it’s an improvement on Rexton models of old.

There are large, comfortable seats and remote controls on the steering wheel for the audio system. However, like other converted passenger models, storage space is not as abundant as in a purpose-built van. Electric windows are standard equipment as is leather trim, cruise control, automatic air-conditioning and Bluetooth connectivity. 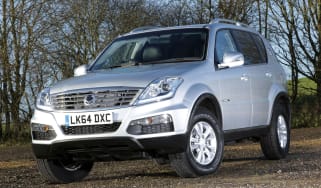 Facelifted van version of Rexton SUV, with four-wheel drive and a five-year warranty, priced from £18,495
Skip to HeaderSkip to Content