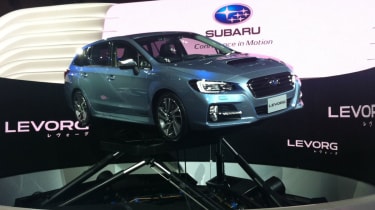 The new Subaru Sport Cross Design Concept has been revealed at the Tokyo Motor Show 2013, alongside the Subaru Levorg production car and the Viziv plug-in hybrid concept car.

The Subaru BRZ-like Subaru Sport Cross Design Concept showcases the firm’s future vision for a new SUV crossed with a sports car, and measures in at 4,300mm - making it slightly shorter than an Audi Q3.

Also on Subaru's Tokyo show stand is the Subaru Levorg, which is a new production model from Subaru, set to be launched in Japan in Spring 2014 prior to a possible arrival in the UK. The car features a high waistline with sculpted wheel arches, which will go some way in helping Subaru achieve a ‘sports car feel’.

It’ll be powered by a newly-developed 1.6-litre turbo boxer engine, as well as a 2.0-litre unit, and will feature the manufacturer's next-generation EyeSight driver assist system, which includes numerous safety functions.

The Subaru Crossover 7 Concept is also at the Tokyo show, a new seven-seat crossover that's claims to be good off-road. There are no pictures of the Crossover 7 yet, but Subaru is promising a sophisticated urban look and an elegant roomy interior. It’s powered by a 2.5-litre boxer engine mated to a CVT gearbox and a symmetrical all-wheel drive system.

Our pictures also show the Subaru VISIV - an innovative plug-in hybrid concept that was unveiled at the Geneva Motor Show. And as you can see from our pictures, it’s a distinctive-looking vehicle. Subaru has combined flowing lines with a jacked-up coupe bodystyle. The futuristic look is enhanced by angular bracket-shaped headlamps that frame the grille.