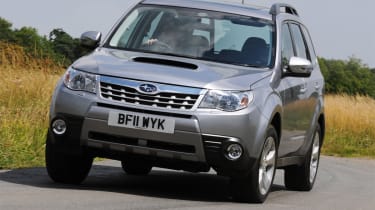 The Forester is all about rugged appeal rather than luxury, and that’s reflected in the hard-wearing interior. Where it scores is with its go-anywhere ability, comfortable ride and space – and, now, impressive economy, too. The problem is that, at £29,000-plus, our top-spec car is more expensive than the entry-level Range Rover Evoque – a model that’s in a different league in terms of quality and desirability.

The Forester is greener than ever. Subaru has fitted a more efficient – yet just as powerful – diesel to its crossover. Is this enough to bring the car up to date?
With an improved turbo and smaller-capacity alternator, the 2.0-litre four-cylinder boxer unit claims improvements in economy and CO2 emissions of around seven per cent over the outgoing car. This takes them to 47.1mpg and 158g/km respectively.
A large 64-litre fuel tank – the 2.0 petrol model has a 60-litre unit – allows a range of 625 miles between fill-ups. The lower CO2 output has reduced the annual road tax bill to £165 as well.
On the road, the diesel Forester feels identical to its predecessor. The horizontally opposed engine is super-smooth and, despite clattering on start-up, it is whisper-quiet, too. It’s just a shame that road and wind noise are pronounced at motorway speeds. A substantial 350Nm of torque delivers good mid-range punch, although that maximum output is available only between 1,600rpm and 2,400rpm.
Long-travel suspension delivers a comfortable ride in a straight line but a lot of body roll in the bends. However, the multi-link rear suspension and four-wheel drive are borrowed from the Impreza, so there’s plenty of grip. The spacious, practical Forester copes well with minor off-roading as well.
Share this on TwitterShare this on FacebookEmail