Subaru has updated its rugged Forester with a new powertrain. We hit the trails to pitch it against the Mazda CX-5 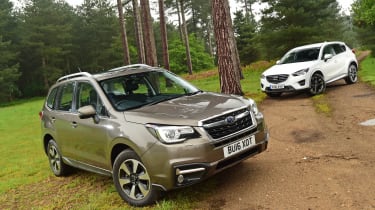 The arrival of the updated Subaru Forester has brought with it the addition of a new powertrain option for the Japanese brand’s mid-size, off-road-focused crossover. For the first time, the Forester is available with Subaru’s 2.0-litre ‘Boxer’ turbodiesel in conjunction with its Lineartronic CVT automatic gearbox.

Up until this car’s launch, if you were after rugged off-road ability with the efficiency of a diesel and the convenience of an auto, you had to look elsewhere. But by adding this new engine and gearbox mix to the line-up, along with the brand’s trademark off-road ability, Subaru has put the Forester in the firing line of some strong competition. 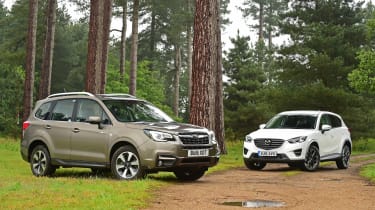 So in a head-to-head battle, which 4x4 offers the better mix of on-road manners, refinement, practicality and – for those occasions when you might need it – all-terrain ability?

We’ve put both machines through their paces on the tarmac and on the loose stuff to find out which is a more compelling all-round package. Read on for the full Auto Express verdict.

The Mazda doesn’t feel as solid off-road as its rival. Lineartronic versions of the Subaru feature X-Mode hill descent control that gives the car an edge away from the tarmac, while the brand’s symmetrical all-wheel-drive system provides good grip. The plastic body cladding adds extra protection, even though it doesn’t look especially stylish. 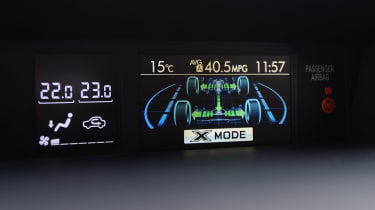 Subaru has improved all its cars’ interiors, but while this Forester features some higher-quality materials, it’s let down elsewhere by budget plastics. The Mazda has more of an expensive feel, with knurled infotainment and ventilation system controls adding sparkle to its classy cabin. 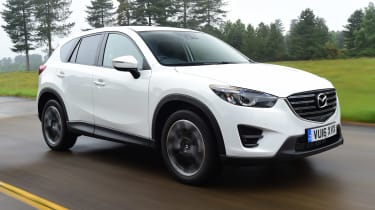 You get more power, equipment and style for your cash with the CX-5. It’ll be cheaper to run than the Subaru, too, plus it’s better to drive on the road, where these cars will spend most of their time. The Mazda can’t quite match the Forester’s off-road ability – although it’ll go further than you’d imagine – but it’s a more refined, attractive SUV that better teams performance and comfort with usability. 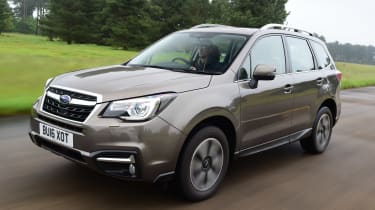 If you’re after a rugged, no-nonsense SUV with above-average off-road ability, the Forester deserves a closer look. It’s also comfortable, well equipped and practical, plus it’s powered by a refined diesel engine. Yet it’s hobbled by its high CO2 emissions and awkward styling, meaning it simply can’t compete against smarter, cleaner choices. 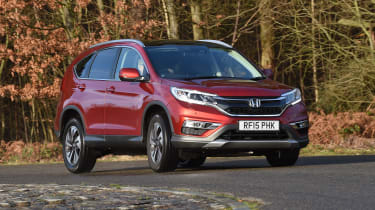 A nine-speed auto makes this diesel CR-V a practical cruiser thanks to a vast 589 litres of boot space. And although it’s only a 1.6-litre, there’s still a healthy 158bhp on tap. The Honda just isn’t as dynamic to drive as our test cars. 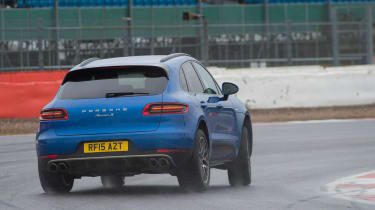 If you’re after more performance and precise handling, the 178bhp Kuga with Ford’s PowerShift auto box and four-wheel drive should fit the bill. But with a 406-litre load bay, it’s not as practical as the Mazda or Subaru.