The Subaru Forester has received a range of mid-life updates, so how does this top-spec XT turbo petrol stack up against rivals? 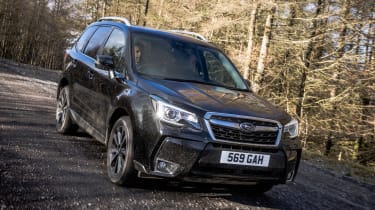 This raft of mid-life updates can’t bring the Subaru Forester in line with accomplished rivals. Its frumpy design is subjective, of course, but its drab interior, thirsty engines and lacklustre drive leave it trailing in such a competitive class. This top-spec turbo is best avoided, too, as the lazy CVT gearbox and soft chassis make it a challenge to drive, and are at odds with the Forester’s workhorse nature. Stick with the diesel, or better still, opt for one of the Subaru’s talented rivals.

Subaru announed earlier this year that it would provide a series of updates for the dependable workhorse of its range, the Forester SUV. Now, we've had a go in the updated car and our first taste comes courtesy of this top-spec Forester XT turbo.

From the front, this new Forester is notably cleaner in its design. There’s a restyled grille and L-shaped chrome trim on the bumper, while our range-topping XT also gets flash 18-inch alloy wheels, LED headlights and twin exhaust tips.

Inside, Subaru says you’ll find a “higher proportion of soft touch materials”, though you’d be hard pushed to point them out. The dash is of acceptable quality, but it trails cars like the VW Tiguan and Mazda CX-5 by some margin. The displays are higher resolution than before, and the central touchscreen is surprisingly satisfying to operate. 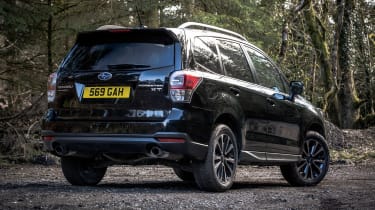 But it’s under the skin where Subaru claims to have made the biggest changes. Refinement has supposedly been taken up a notch, while the suspension has been tweaked to improve the ride over poor surfaces. Engineers have also fettled the steering to make it more responsive on the road.

While it sounds like quite a comprehensive overhaul, the Forester feels much the same from behind the wheel. This 2.0-litre turbo petrol is nicely refined, but most buyers will favour the diesel – which is likely to suffer from all the obvious refinement issues, shakes and rattles. The stepped-CVT Lineartronic gearbox remains, which despite creating artificial ratios to mimic a conventional auto, never feels quite as smooth a dual-clutch setup.

The engine feels laboured, too. With forced-induction now the norm among modern production cars, many manufacturers have learnt to limit turbo lag – but it’s here where the Forester XT feels so old fashioned. There was an undeniable disconnect between input and answer when flooring the accelerator on our XT, forcing you to plan overtakes with plenty of warning. The brand’s symmetrical four-wheel drive system will push the 237bhp XT from 0-62mph in 7.5 seconds, though in reality it never feels that fast. 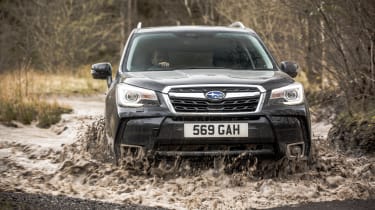 Moreover, fiddling with the three drive modes does little but make the car feel more nervy, so you’re best leaving those to their own devices. There’s loads of body roll, too which encourages slower progress on twistier roads, but at least the steering is reasonably accurate – allowing you to place the car with a degree of precision.

The XT is the most powerful engine available in the UK. Though despite the turbo, running costs for this petrol model are high. Subaru claims 33.2mpg, while CO2 emissions of 197g/km mean it’s much more expensive to tax than diesel-only rivals.

However, where it fails on the road, it excels off it. The capable X-Mode all-wheel drive system and raised ride height will take the Forester where no Nissan Qashqai could dream of going. There’s a reasonable amount of underbody protection, too, allowing you to explore rutted terrain with confidence.

Practicality remains a Forester strong suit, with a large and square-shaped tailgate that ensures easy loading of bulky boxes and heavy items. The 505-litre boot expands to 1,592 litres with the rear seats folded flat – putting it on a par with models like the Ford Kuga and Renault Kadjar.