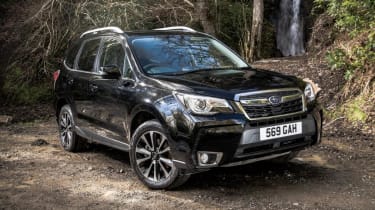 There’s a lot to like about the Forester, but its talents aren’t as wide-ranging as rivals’. Many of the alternatives above are fine all-rounders, but the Subaru only really stands out for its reliability, safety and practicality – plus its off-road ability, if you need this. Admittedly many of these things are extremely important to buyers, but the Forester is outclassed dynamically, while its styling is awkward and the interior is dated. That means the Forester is worth considering if you can buy one at the right price, but you should try some of its rivals before parting with your cash.

Subaru started making cars in the fifties, but it wasn’t until 1977 that its models were officially sold in the UK. Since then the brand has gained a reputation for producing tough cars, invariably with four-wheel drive, and occasionally a hefty dose of sportiness thanks to the success of turbocharged versions of the Impreza in rallying.

For those wanting something spacious, durable and decently swift there has also been the Forester, available since 1997. The fourth generation that arrived in 2013 was Subaru’s most popular model in the UK, but with the brand taking just 0.1 per cent of the market, it was still very much a niche product. 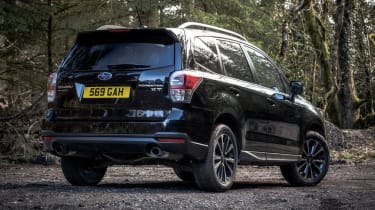 The fourth-generation Subaru Forester went on sale in the UK in May 2013, priced from £24,995. Buyers could choose between 2.0-litre petrol or diesel engines, the former coming in 148bhp naturally aspirated and 237bhp turbocharged forms.

The non-turbo petrol and 145bhp diesel came with a six-speed manual gearbox as standard, but the naturally aspirated petrol unit could be specified with a CVT auto marketed as the Lineartronic, which came as standard with the 2.0-litre turbo engine.

By April 2015 the diesel could also be specified with a Lineartronic transmission, but these cars are rare on the used market. At the same time an upgraded interior was introduced, with a touchscreen infotainment system and higher-quality trim. There were further interior upgrades in May 2016, along with recalibrated suspension.

When it comes to running costs, diesels make the most sense; the petrol units are refined and the turbocharged XT is great fun, but fuel and insurance costs will be steep. We’d stick with a manual gearbox because the CVT isn’t as nice to use in automatic mode. It’s better if you use the paddle shifts and treat the transmission as a manual, but that rather defeats the object. 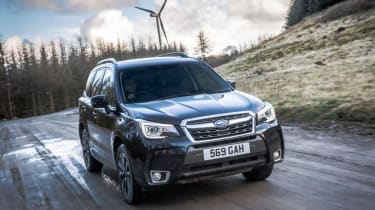 Alternatives to the Subaru Forester

The Forester is up against some keen rivals, including the Nissan Qashqai, which is an excellent all-rounder. Plentiful, decent value and practical, this is a desirable car, but its reliability can be less than impressive.

If you want to enjoy driving your SUV, the Ford Kuga is worth a look; there are plenty of them around, they’re good value, and they handle well. Dynamics are one of the main attractions of the Mazda CX-5, too, which looks smart and is very well made.

The Volkswagen Tiguan offers a user-friendly cabin, good looks and strong engines, much like the (higher-quality, but more expensive) Audi Q3. But also consider the Toyota RAV4 and Honda CR-V; the latter is available as a seven-seater as well.

Fuel-saving stop/start systems come only on non-turbo petrol-engined versions of the Forester.

The EyeSight suite of safety features was introduced in autumn 2017. This is worth having, because it increases accident prevention/mitigation.

Unlike some rivals, the Forester has permanent four-wheel drive, which is great for traction, but not so good for economy.

The good news is that the Forester has plenty of head and legroom for five adults, while the boot is spacious, although the back seats don’t fold flat. The bad news is that the car trails behind its rivals inside: the Forester doesn’t feel very premium; the materials aren’t plush, and the design is tired. Early examples feel even more dated, because Subaru improved the car along the way. 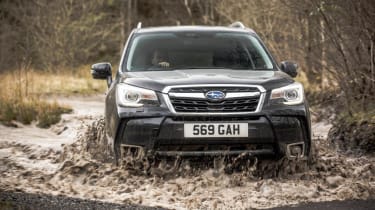 There are no cambelts to replace, but the coolant has to be renewed every 100,000 miles, at £100. New brake fluid is needed every two years. The cost is built into the service, but you’ll pay £40 to have it done separately.

The Forester has been recalled five times. In August 2016, cracks in the air intake could lead to poor idling or stalling engines. Faulty passenger airbags caused a July 2018 action. There have been three recalls in 2019: a hydraulic pipe could rub against the wiring, causing short circuits; some engines had sub-standard valve springs; and a faulty brake-light switch was behind the third.

Owners rate their Foresters more highly than we do: in the 2017 Driver Power new car survey the Subaru was 10th out of 75 cars, and in 2016 it finished in an even more impressive eighth. In the more recent survey the car was first for safety and ride and handling, while it took fourth place for its interior/comfort and engine/gearbox. The lowest score was for the car’s exterior.