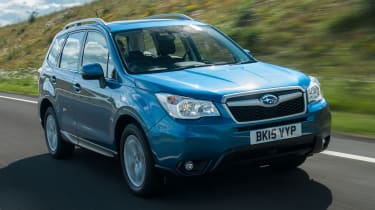 The updated Subaru Forester remains a niche choice despite the updates. Its anti-fashion styling means it fades into the background, so its rugged off-road roots remain its main selling point. The problem is, in a market which is becoming spoilt for choice, the Forester appeals to an increasingly small band of buyers, many of whom already own one. So, whereas in isolation it has a certain charm, as a business case it’s beginning to look seriously flawed.

The Subaru Forester has forged a loyal following thanks to its unusual styling that blends estate and SUV, along with its rugged image and focus on off-road ability.

This is the latest version and there are no visual differences to speak of over the previous model. With the flood of new and fashionable crossovers, such as the Mazda CX-5 and Nissan Qashqai, the Forester’s boxy silhouette is starting to look dated in an increasingly style-conscious sector.

However, there are important changes inside. The previous Pioneer aftermarket-style infotainment system has been ditched in favour of Subaru’s own 7.0-inch display, featuring sat-nav and Bluetooth. It’s far more intuitive to use but at times it proved to be frustratingly unresponsive. 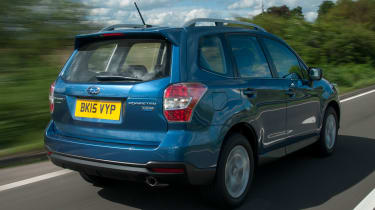 Subaru has added extra sound deadening to the updated Forester and while it better isolates gruffer engine notes on the move, the diesel motor stills clatter into life and is too noisy on the road. There’s a punchy 350Nm of torque on offer, but the CVT gearbox doesn’t make the most effective use of it and blunts performance.

You have to rev the engine to make real progress – unusual for a diesel but it’s a common gripe with most CVT gearboxes, so you’re best off sticking with the six-speed manual and pocketing the £2,000 saving.

Standard four-wheel drive will appeal to Subaru’s target customer but it comes at the expense of fuel economy. Subaru claims 46.3mpg and 158g/km of CO2, poor when compared to an equivalent four-wheel-drive Honda CR-V with 55.4mpg and 134g/km. 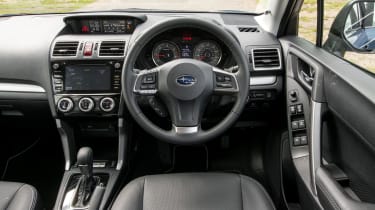 On the move, the Subaru is composed on quicker A-roads but fidgets over fractured or uneven surfacest at lower speeds. Permanent all-wheel drive won’t leave you short on grip, but the overly light steering doesn’t relay much information back to the driver. Venture off-road and the Forester is at home thanks to its impressive ground clearance, dedicated off-road setting and no-nonsense attitude.

Inside, cabin quality isn’t quite up to class standards. There’s a real mix of plastics and textures on the dash and centre console where you’d expect to find plusher materials given the near £31,000 price tag.

One thing you won’t be complaining about, however, is a lack of kit. This top-spec XC Premium model comes with an electric sunroof, sat-nav, DAB radio and leather upholstery as standard. While the sunroof may sound like a bonus it does throw up a few issues, as it eats into rear passenger headroom and occasionally casts direct sunlight onto the 7.0-inch display, making it difficult to operate.

The 505-litre boot is a decent size and significantly larger than the Qashqai’s, with the wide and long load bay increasing to 1,577 litres with the rear bench folded flat.