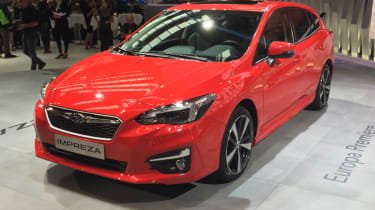 The new 2018 Subaru Impreza has made its debut in European spec at the 2017 Frankfurt Motor Show.

The new Impreza was first shown at the 2016 New York Motor Show, and it has already been on sale in the US for some months now. When it was launched there, bosses wouldn't confirm sales in Europe, but it will be going on sale across the continent and in the UK.

The Impreza hatchback is a rival to cars like the Ford Focus and Volkswagen Golf and it's built on Subaru's new Global Platform. It's the second car to use this platform after the all-new XV, and it means the Impreza is larger than its slow-selling predecessor. The wheelbase has increased by 25mm, so cabin space will be boosted, while the new car also boasts a boot 10-litres larger than before.

Subaru claims the new chassis increases body rigidity by as much as 70 per cent over the old car. The centre of gravity has been lowered by 5mm, too, which Subaru claims will boost handling, steering and responsiveness. 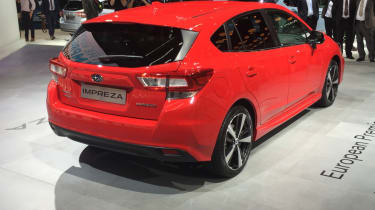 UK buyers will be offered two petrol engines – a 1.6-litre unit lining up alongside a 2.0-litre, both of which are flat-four boxer engines. The 1.6-litre develops 112bhp and 150Nm of torque, while the more powerful 2.0-litre produces 154bhp and 196Nm of torque.

Subaru has yet to issue any performance or fuel economy ratings for either engine, but the firm promises that these latest boxer units are more refined, and have been redesigned to reduce vibration. Both engines deliver power to an all-wheel-drive system via a Lineartronic CVT gearbox.

The cabin is overhauled with a cleaner dashboard layout that features a pair of screens in the middle of the console. The bigger screen displays the navigation and infotainment controls, and features Subaru's STARLINK multimedia system. This system is already available in the Levorg estate, and features connected car capabilities including emergency assistance, remote car functions and servicing updates, similar to Vauxhall's OnStar service. A multi-function display sits on top of the dashboard, too.

In the UK, the Impreza gets an eight-inch touchscreen infotainment system with Apple CarPlay and Android Auto connections, DAB radio, electric windows and electric door mirrors. 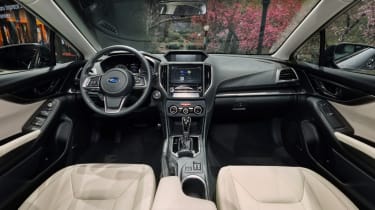 Safety tech includes Subaru's EyeSight system, as seen on the Levorg. This uses stereo cameras to monitor the road and traffic for potential hazards.

On European cars, the EyeSight system will be fitted as standard. Pre-collision braking and throttle management, adapive ctruise control, lane departure warning and lane keep assist technologies are all part of the EyeSight package.

Full European specs will be revealed at the Frankfurt show, although in the UK the Impreza is likely to be sold as a five-door, with the four-door saloon unlikely to make it to these shores.

What do you think of the new Subaru Impreza? Let us know below...