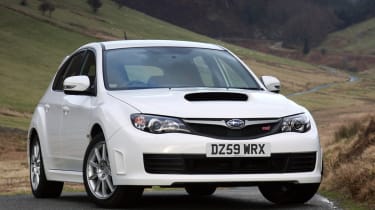 The current Subaru WRX STi is latest in a long line of high-performance versions of the humdrum Impreza family car. While the standard model has never been a class leader or a strong seller in Europe, its hot turbocharged four-wheel-drive derivatives have attained legendary status thanks to their links with Subaru's rally programme. Insurance and fuel costs are predictably very high, but the levels of performance and handling on offer are truly staggering. Unfortunately, Subaru has neglected certain aspects of quality and refinement compared to more polished rivals such as the VW Golf R or Audi S3.

A 296bhp turbocharged four-cylinder boxer engine takes the Impreza WRX STi from 0-62mph in only 5.2 seconds and on to an electronically limited top speed of 155mph. But performance figures only tell part of the story. The intelligent four-wheel-drive system offers astounding grip, particularly in wet conditions or on poor road surfaces. Adjustable modes allow you to tailor the throttle, gearbox and suspension settings to suit the road and driving conditions. Finally, huge Brembo brakes front and rear mean the Impreza stops just at rapidly as it goes. The overall effect is exhilarating and confidence-inspiring in equal measure.

Subaru claims the WRX STi will return an average of 26.9mpg, but using its performance to the full will see closer to mid-teens figures. High CO2 emissions of 243g/km attract Band L road tax, while the Impreza's breakneck performance and desirability among car thieves push insurance prices extremely high, too. Only you can decide if the driving experience is worth all this financial sacrifice, although it has to be said the £33,000 list price is good value when you take the supercar-rivalling performance of the WRX STi into account. Residual values are reasonable, as well kept cars are sought after by enthusiasts.

No-one would ever call the WRX STi pretty, but it does look sufficiently menacing and aggressive, with oversized wheelarches, chunky bumpers and an unmissable rear spoiler. The large rear light clusters aren't very attractive, however, and the overall effect is anonymous: this is definitely not a car you buy for its looks. The interior is even more disappointing, with the quality of plastics used falling well short of those seen in European rivals. At least the controls are all laid out sensibly, but this Subaru cabin is very definitely a functional rather than pleasant environment.

Five doors and a hatchback boot make the Subaru WRX STi as usefully practical as any other mid-size family car – it just moves a lot faster than they do. The sports seats in the front are amazingly supportive and comfortable, while there's plenty of room for adult occupants in the back. Folding rear seats can be used to free up a total of 1,216 litres of boot space. Big cup-holders and door bins mean you're never short of storage space in the cabin, either, so the WRX STi demands no compromises if you want to use it as a family car.

Like most Japanese car companies, Subaru has mantained an excellent reputation for reliability over the years, and this also applies to high-performance models like the WRX STi. Servicing and mainteneance schedules must be strictly adhered to, however, but owners have always been particularly complimentary of the Subaru dealer network. Four-wheel-drive and a host of electronic aids mean the WRX STi is a very safe choice on wet or icy roads and you get six airbags as standard. The only chink in the car's safety armour is the fact that the Impreza on which it's based received four out of five stars when crash-tested by Euro NCAP. 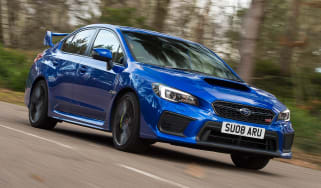 Just 150 units of the Subaru WRX STi Final Edition will be sold in the UK, but buyers will receive a feisty four-door
Subaru WRX STi 2014 review 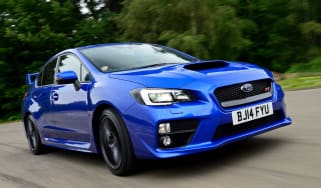 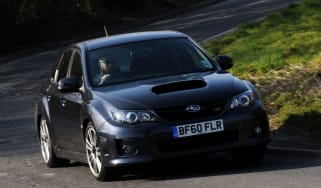 The latest generation of turbocharged Subaru might have changed its name - but does it still offer the same driving thrills as before?
Subaru WRX STI 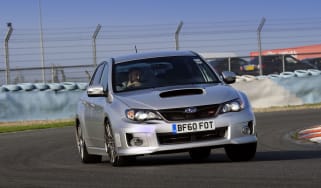 Subaru's rally-inspired WRX drops the Impreza name and returns to its roots with a saloon body, and hardcore suspension.
Skip to HeaderSkip to Content