When it comes to budget off-roaders, Suzuki is top of the class. Whether it is the Jimny or Grand Vitara, the Japanese maker's 4x4s have a reputation for punching above their weight. So can bosses apply this off-road know-how to a hatchback? 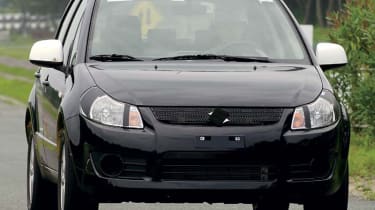 With an attractive shape, lots of space inside and limited off-road ability, Suzuki's new model will widen the firm's appeal. MPV-style folding and sliding seats would have helped, but the SX4 has excellent handling and a strong range of engines. Pricing looks set to prove crucial when it comes to persuading people to buy into such a narrow niche.

When it comes to budget off-roaders, Suzuki is top of the class. Whether it is the Jimny or Grand Vitara, the Japanese maker's 4x4s have a reputation for punching above their weight. So can bosses apply this off-road know-how to a hatchback?

The SX4 is a cross between a supermini, an SUV and an MPV, and has been designed to merge the benefits of all three classes. We are used to seeing disguised machines on the pages of Auto Express, but they are not often found in the new cars section. With Suzuki's all-wheel-drive crossover still nearly a year away from launch, the company wants to keep the newcomer under wraps.

Launching a model into an unproven sector of the market is a brave move, and so the engineers are understandably apprehensive. Allowing journalists to take the wheel of early prototypes not only provides valuable feedback, but enables us to see what compact SUV buyers have got to look forward to.

As part of an ambitious expansion plan, the new model has been developed with the financial backing of Fiat. A virtually identical model will be sold by the Italian giant, but it is Suzuki that has shown its hand first. Given a top-secret glimpse of an undisguised SX4, we can reveal that it is a sharp-looking hatchback, with Citroen C4-style headlamps and a well proportioned body.

Based on an extended version of the Swift's platform, the SX4 will be available in both front and four-wheel-drive, with the 4x4 variant benefiting from a more muscular appearance. Roof rails with a Citroen C3 XTR-style bodykit will be standard on the soft-road model, but are likely to be optional on the front-driven variant, too. Both versions come with an attractive, if forgettable, dashboard with a next-generation Grand Vitara-style upright centre console. The final materials have yet to be selected by designers, so we weren't allowed to take photographs of the interior. However, the showroom model is likely to be solidly built and very durable.

Given the tall stance, it is no surprise that the SX4 offers lots of headroom, and space in the cabin is excellent. The large glass area gives a light and airy feel, while there is plenty of room in the boot. The only letdown is the conventional 60/40 rear bench design - compact MPV-style flat-folding chairs would have been more versatile.

We tried front and four-wheel drive variants, and both were surprisingly agile on Suzuki's private test track. Point either model through a fast corner and body roll is limited to give a feeling of control. Unlike many SUVs, the Suzuki's steering does not seem over-assisted.

Only around 20 per cent of buyers are expected to opt for all-wheel drive, but those who do can select front-drive mode via a switch next to the gearshift.

A choice of 1.5 or 1.6-litre petrol engines will be available, but the Fiat-sourced 1.9-litre turbodiesel unit is likely to prove most popular. Equipped with a six-speed gearbox, the oil-burner offers strong performance, yet lacks the refinement of diesel-powered class leaders.

Insiders are remaining tight-lipped about pricing. With rugged supermini rivals in short supply, the SX4 will be carving its own niche, but is unlikely to sell for less than £10,250. While there is still work to be done, it looks as if Suzuki has a valuable addition to its 4x4 range.