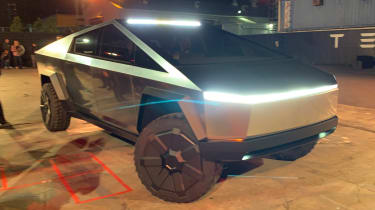 As is traditional at Tesla reveals, quick rides in the new model were offered to the eager crowds, and Auto Express was one of the first invited to experience the new Tesla Cybertruck first hand.

As the new pick-up approaches us, head and roof lights glaring in the crisp Autumn evening, the size of the Cybertruck surprises. It’s big, but not in the same over-bearing way that a traditional pick-up is. The angular lines hide some of the bulk well, but the width, the depth of the sides and the unusual shape all widen your eyes.

The stainless steel finish is beautiful, though – very Back to the Future, reminding us of the DeLorean that was the star of the movie series. Tesla employees said that you can simply brush away any blemishes with wire wool. 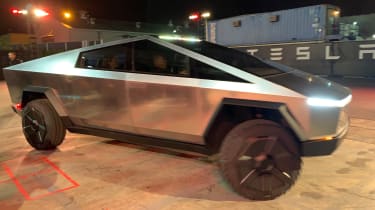 Although the Cybertruck will seat six, four of us were invited to climb into the car with the driver as we chose to sit behind the front passenger. In spite of us all being decent-sized men, there was plenty of shoulder room in the back, while sitting behind a six-foot-plus front passenger still left us with plenty of kneeroom, too. And in spite of the angular roofline, head space was fine, looking up through the glass roof at the Californian sky beyond.

Behind us was a further glass panel giving a clear view of a beautifully-finished stainless steel load bay with side buttresses angling away from the cabin down to the squared-off tailgate.

Turning round, our driver introduced us to the 17-inch touchscreen, looking as clear and sitting as proud on top of the dash as it does in a Model 3 – current Auto Express Car of the Year. The dash itself seemed to have a more premium marble effect rather than the clean white plastic that’s prevalent in the Model 3.

Above that was another digital panel, this time a screen in the shape of a rear-view mirror, showing the view behind the rear deck in high-definition quality.

With hundreds of people waiting patiently for their turn in the Cybertruck, our driver moved off swiftly with the usual gentle whine of electric motors in this Dual Motor version. We were taken aback by a sharp bump as we exited the car park of Tesla’s design centre and out onto a nearby road, specially closed off for the occasion.

Then, as you have to in a Tesla, the drive gave a quick squirt of the throttle, throwing us back into our seats; it felt even more odd in a vehicle of this size and stature than it does usually. 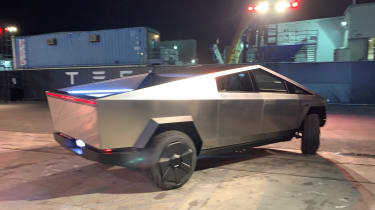 It felt just as quick as any other Tesla we’ve been in, while the swift U-turn surprised with the lack of body roll as the driver swung the car around and headed back for the next eager passengers.

The ride felt firm, but not uncomfortable – in fact a little like a Model X – but even in this early prototype, the quality and style of the interior impressed, especially in a class where neither really exists in today’s range of pick-ups.

In summary our short experience of the Cybertruck left us impressed. It felt very much like any other Tesla, but that was all the more remarkable given the size of the truck.

This time for Tesla, though, the look of the vehicle is going to give you as much to talk about as its performance.