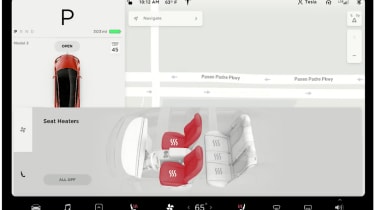 Tesla has always hidden ‘Easter Eggs’ within its infotainment systems of its Model S, Model X and Model 3, and the latest software update introduces the ability to play a range of classic Atari games. Version 9.0 introduces the likes of Asteroids and Centipede, turning the touchscreen - when parked, of course - into a classic arcade console.

The addition comes along with several more useful - albeit less fun - upgrades. All three models in the Tesla line-up gain tweaked user interfaces designed to make the system easier to use.

A new app launcher feature groups commonly used features like the calendar, energy usage, web browser, rear view camera, phone and charging apps in one place. To dismiss an open app you can now swipe downwards on the screen, while reopening the last-used app takes an upward swipe.

In order to make the climate controls easier to use, the ability to turn the system on or off can now be done without opening the full menu. Other functions, like heaters for the steering wheels, back seats and wipers are all relocated into one simple part of the menu.

Previously, it was only possible to initiate a software update on the car’s own screen. However, a revised Tesla mobile app allows users to remotely launch any updates from their smartphone. Further improvements to the app also enable mapping locations to be sent directly from the app to the car’s navigation system.

Any Tesla with hardware 2.5 or newer (first introduced in August 2017) can also use the forward facing camera as a dashcam. One tap of the on-screen record icon saves the last 10 minutes of driving footage.

The 360 surround camera system has received attention too. The software is now better able to recognise other vehicles around the car, and can ‘see’ and display them in a full surround view. Unlike previously, it can also differentiate between cars, motorcycles and trucks of varying sizes.

The blind spot monitoring system makes use of both cameras and ultrasonic sensors (previously it was just the latter), and can display any potential hazards on-screen. Attempting to make a lane change while a vehicle is in the way will cause the on-screen lane to turn red.

The updates are already available in the US, while UK owners will be able to download the patch in the next couple of weeks.

Beyond the introduction of the software upgrade, the National Highway Traffic Safety Administration, the North American equivalent of Euro NCAP, has stated that the Model 3 offers the lowest probability of injury of any car it has ever tested in the event of an accident. The lack of a combustion engine up front and by concentrating most of the mass as centrally as possible means that, according to NHTSA, the car’s crumple zone is able to perform more effectively than in a traditional petrol or diesel-powered car.

The Tesla Model 3 offers impressive performance, great range and a unique take on car design. It’s an expensive EV, but one of the best.
Tesla Model X review 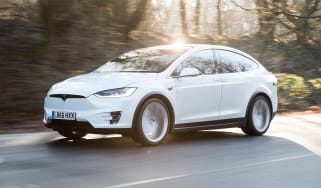