The all-electric Tesla Model X SUV has arrived in the UK, but is it a match for its conventional rivals? 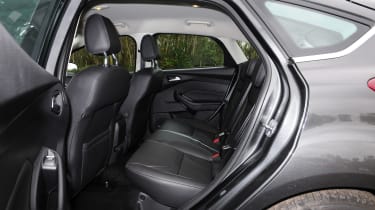 The Tesla Model X isn't quite the revelation that the Model S was, but those who have the right lifestyle - and who can afford the high price tag - will find that this car is a perfect match. We prefer the Model S, with its more composed drive, more practical rear doors and more handsome looks, but for those who really want an electric SUV, then there’s little else like it.

Following our first test of the new Telsa Model X in Germany, we've now been given the chance to try the car on British roads for the first time. With the new P100D just around the corner, it’s the more modest 90D we look at here.

The extra practicality of an SUV, plus the premium aspirations of many buyers, means the Tesla Model X is entering into a lucrative market sector. These cars are undeniably on-trend at the moment, and the Model X is positioned to offer a compelling argument for all-electric travel.

With a total range of 303 miles, there's not much separating this and a gas-guzzling SUV for cruising capability. Although even with Tesla's quick-charging Supercharger system, it's still faster to fill up a conventionally-fuelled car to continue your trip. 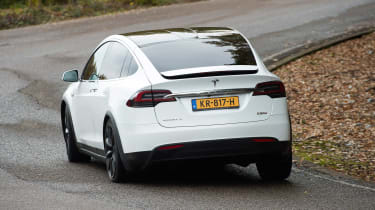 It's getting easier and easier to justify an electric car like this, though. If you have the ability to charge your Model X at home, then even a lengthy commute will be easily doable every day. The cost savings compared to a petrol or diesel rival are a big plus for the car, too.

There aren't many SUVs that offer the same performance as this one, either. It takes just 4.8 seconds to go from 0-60mph, which is astonishing for an SUV this big and heavy. At higher speed it's not quite as gut-wrenching, but from 40-70mph, where you'll often use the power on faster roads, there's little else like it.

The acceleration is accompanied by a slight whirr of the motor, but it's otherwise eerily serene inside as you blast up to speed - although the powerful speaker system makes the best use of the insulated cabin. There's a bit of wind noise at higher speeds, but it's not enough to intrude on cabin comfort. 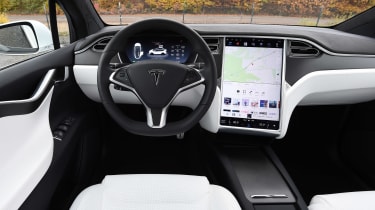 It’s in the corners where the Model X starts to disappoint. The long, sweeping corners on our German test suited the car well, but on tighter British bends the Model X starts to feel far too heavy to really enjoy driving quickly. It's competent, but there's not enough feedback or agility for keen drivers to fully enjoy.

The sleek Model S was the basis of the Model X's design, but the SUV is the ugly brother. The flat front with a tiny grille and high-sided profile give it a bit of an awkward look. It's not as handsome as a Volvo XC90, for example.

Inside, the Model X can’t quite compete with an XC90, but the seats look and feel good, and the huge central touchscreen is unlike any system in any other car. However touchscreens are inherently difficult to use on the move, so we'd have liked to see at least a few buttons that you can use while travelling at speed.

The 'Falcon Wing' doors are a nice gimmick and a suitable party piece, but in practice they are more annoying than fun. The annoying beep that plays is one thing, but they're slow to open and close, and seem to get upset easily by people standing nearby, tripping the sensors that stop them opening into a wall or roof. A set of normal doors would just be better – as boring as it sounds - although the access to the back seats is admittedly very good with them open.

The front and rear seats have lots of adjustment, and you you can option the car with four, five, six or even seven seats. In the second row there’s lots of leg and headroom, but behind these there's really not much space at all. Adults will find themselves hunched over and pressed in, though they're spacious enough for kids. 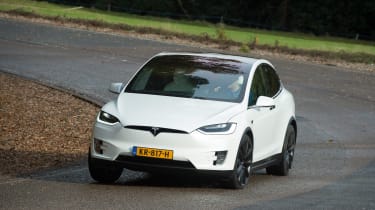 A total of 2,180 litres of space means there's lots of luggage space, and thanks to the lack of engine there’s a 187-litre boot in the nose too. At the rear, the boot floor can be raised up to reduce the loading lip, and a panel can be removed to open up a deep section behind the rear seats for storing things such as the car’s bulky charging cables.

The interior itself is smart-looking and the materials used are suitably plush. The build quality of this early left-hand drive model wasn't particularly impressive, but Tesla promises right-hand drive customer cars will be better. While reports of quality issues from owners in the US are stacking up, we'll have to wait for the results of our Driver Power survey next year to find out what British buyers think. If this year's Model S whitewash is anything to go by, there should be few major problems.