Can the all-new Audi e-tron SUV topple the mighty Tesla Model X? We find out in our highly anticipated electric car head-to-head 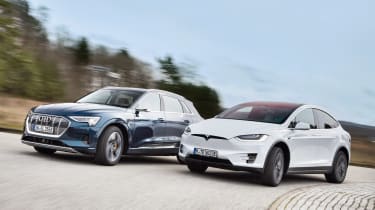 Tesla hasn’t quite managed to become a byword for the electric car in the same way that a Hoover is actually a vacuum cleaner, but it’s impossible to avoid namedropping the American brand every time a new premium electric car hits the market – and that’s something that’s going to happen a lot over the next 18 months.

Jaguar was the first premium rival to lock horns with Tesla, with the I-Pace. We liked the big, battery-powered Brit very much, declaring it our Car of the Year last summer.

Up next is Audi with its all-new e-tron, before Mercedes and BMW take a swing at Tesla’s SUV with the EQC and iX3 respectively. As with the Tesla Model X, the new Audi is a powerful and luxurious SUV with big measurements and lots of space. 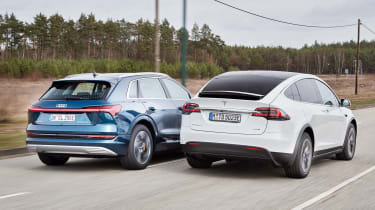 Also, a rapid charging system along major European routes (much like Tesla’s Supercharger set-up) is under development in the form of the Ionity network, shared across numerous brands, including Audi.

The e-tron is a car made with Ionity firmly in mind, given its recharging capabilities, and on paper it’s a car that has the potential to clip the wings of the Model X.

At this moment in time both of these models are at the absolute top end of electric car technology, desirability and range. Both of them hum smoothly and elegantly, but pinning the throttle reveals a violent level of acceleration low down when needed. However, the Audi and Tesla both have something else to offer in abundance: battery range.

Tesla’s latest figures for the 100kWh Model X make impressive reading: 0-62mph in 4.9 seconds, a top speed of 155mph and a range of 351 miles on a single charge. That final figure should be taken with a big pinch of salt, mind, because the brand still uses the outdated NEDC test regime. 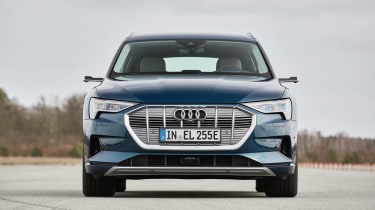 In contrast, the 249-mile figure claimed by the 95kWh battery in the Audi has been obtained under the newer and tougher WLTP test, and as such, it should prove to be much more accurate.

The e-tron is not as quick as the Tesla, and this is down partly to its hefty weight. Audi’s first pure EV does not sit on a dedicated EV platform; instead it uses a heavily modified version of the Volkswagen Group’s MLB architecture, which is heavy.

Either way, the discrepancy between the NEDC-correlated Tesla and the WLTP-tested Audi is brought to a close on a motorway blast. At higher speeds, expect the Tesla to return around 180 miles of real-world range, with the Audi a little behind on 174 miles. Both cars can muster more than 200 miles of real-world range on a single charge, in a less taxing mix of environments.

Just as important as range is charging, and both of these premium electric SUVs make compelling cases for themselves. 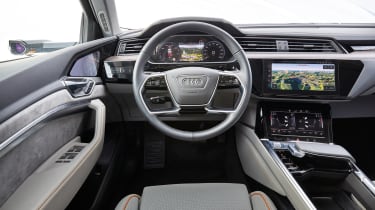 It’s impossible to ignore the impressively large 120kW Supercharger network that the Model X can count upon. In the UK, the scheme stretches from Folkestone to Inverness, and while looking at the Supercharger map reveals that it is still primarily attached to major roads, the charging grid continues to expand. Indeed, ever more rural charging stations are expected to open this year.

Ultimately, though, the e-tron can recharge at a faster rate than the Model X when linked up to a suitable rapid charging point. The Audi’s clever thermal management allows recharging at 150kW, which means an 80 per cent top-up can be achieved in just under half an hour. Unfortunately, the UK’s network of 150kW ultra-rapid chargers is still embryonic. So while the e-tron is technically more capable than the Model X, there is at present almost no opportunity for it to prove it.

How are these two SUVs on the road? Ultimately, both exhibit the two trademark EV hallmarks: immense power off the line and exceptionally serene running. However, both suffer the same performance pitfalls, too. Up to an electronically limited top speed of 124mph in the Audi, and 155mph in the Tesla, you will move forwards ridiculously rapidly. But the cars’ systems will very quickly become too hot, and performance will be pulled back accordingly.

Here is where the first major difference between the e-tron and Model X lies. The Audi is focused on maintaining a consistent level of performance, with several electronic muzzles dictating how much power can be used and for how long. So while its top level of performance can’t match the Tesla’s, the trade-off is that you’d really struggle to get the e-tron out of its comfortable temperature range and into limp mode. Max power of 402bhp is only available for eight seconds, although you can have 335bhp for up to a minute.

Drive the e-tron normally, then, and it’ll operate in a very safe window, producing just 134bhp. The Tesla is far more liberal with how its power can be dished up; if you want all 517bhp you can have it, but only until the battery and motor begin to cry for mercy. After this, performance fades quickly as the car battles to cool itself. It is the more exciting proposition, though.

Comfort goes hand in hand with silent electric running, and it’s something the Audi is better at. Lower road noise, combined with smoother ride quality, more consistent steering and great roadholding, all mean it is excellent to drive regularly. 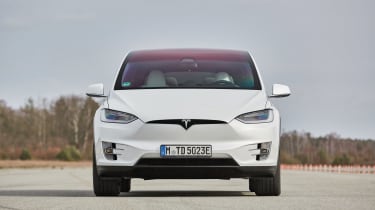 The Tesla is the noisier SUV, and the silence of the electric motor is replaced by tyre roar and bodywork creaks. In addition, it seems harder to direct; the imprecise chassis and explosive powertrain make it more difficult to drive really accurately.

In the cabin, both cars are not without their pluses and minuses. Dashboard design and layout are something totally subjective; we’ll leave it to you to decide which one you prefer the look of. But both of these cars feature cutting-edge infotainment and interior technology.

The Tesla feels like it has a little more cabin space to offer. The Model X is available with seven seats, of course, and it features far more in the way of boot space. But the quality inside doesn’t quite match the Audi’s. A quirk of the gullwing-style “Falcon doors” is that a beam running down the centre of the car hinders head space in the middle rear seat, and while the doors themselves are dazzling, they are far from ideal in tight car parks. 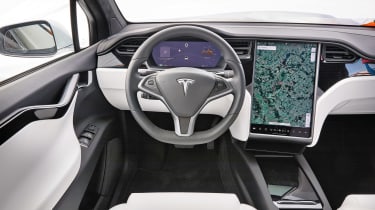 The Audi isn’t without its quirks, mind you – chiefly the camera-based door mirror system. Cameras on dainty brackets capture the images to the left and right of the car, and these are relayed to small monitors in the door trims. It sounds like science fiction and in real-world use it feels unnatural; hi-tech though it is,this is an option we’d leave unticked.

So while the e-tron doesn’t field as impressive a powertrain as the Tesla, nor have as many features, it does feel like a higher-quality car inside and out. And yet it has a significantly lower price.

At present, Tesla asks £82,350 for a Model X Long Range with no optional extras. The base price of the e-tron at launch is £68,020. In fact, you could even snag the e-tron Launch Edition – a version stacked with optional kit – for £82,270. When you’re spending that much, quality matters, and the Audi has it in spades.

Audi e-tron: On paper the e-tron has the quicker charging potential, but the network needed to support it is still in its infancy in the UK.

Tesla Model X: Supercharger network is one of the Tesla’s biggest plus points; it’s fast, reliable and continues to expand, even into rural areas. 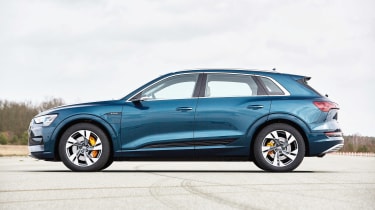 Superior steering and ride quality, consistent performance, heavy on tech and impeccably finished. In everyday use the Audi is the better choice, but it definitely lacks the Tesla’s thrilling edge. 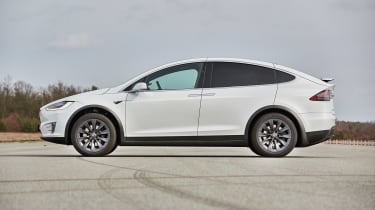 Still packs the punch to be a hugely exciting and enticing electric car. It will continue to have its fans, but the e-tron feels like a higher-quality, more comfortable car for less.