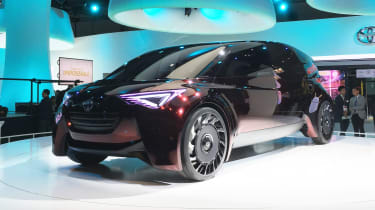 Toyota is previewing fuel cell technology, with significant gains over its existing Mirai model, with the Fine-Comfort Ride, which has been unveiled at the 2017 Tokyo Motor Show.

The Japanese brand’s novel six-seater weighs more than two tonnes and features a long tubed hydrogen tank capable of holding six kilos of fuel. But the car has a predicted range of more than 600 miles - thanks, in part, to gains made in the fuel cell ‘stack’ that converts the mix of hydrogen and oxygen into electricity to power the Fine-Comfort Ride’s four in-wheel motors. Toyota is targeting a total output of 416bhp.

• Get the latest from the 2017 Tokyo Motor Show

“The next generation of stack has an efficiency gain of more than 10 percent over the Mirai’s stack,” Takao Sato, the project’s chief engineer, confirmed at a pre-Tokyo-show briefing. And while he declined to confirm that the car could make production, he stated, “The Fine-Comfort Ride is a concept, for now. But we are developing technologies for the future and we are active in various developments. Launch timing is not decided but 2025-2030 is the target date for making it complete.” 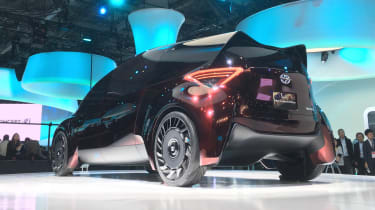 Sato said the concept would feature “next-generation battery technology” but did not provide details. It’s conceivable that the range and performance of the car is based upon the adoption of solid-state batteries, which Toyota has already said it will put into production early in the next decade. These would offer a significant advantage over existing lithium-ion cells, and potentially help the Fine-Comfort Ride’s overall efficiency.

The Fine-Comfort Ride is a long hatchback - at 4,830mm, it's around 30cm longer than a Prius, although it's marginally shorter than the Mirai. The concept's wheelbase is significantly longer than that car’s, though; in fact, at 3,450mm, it's almost 30cm longer than the gap between the axles on a stretched Mercedes S-Class. Toyota's creation is wider than the limo too, at just under two metres.

The Fine-Comfort Ride's powertrain and in-wheel electric motors allow the wheels to be placed right at the corners of the vehicle. This, in turn, frees up considerable cabin space - enough, Toyota claims, for the car to be a six-seater. 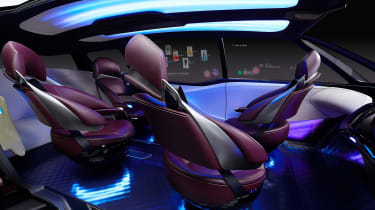 The front two rows consist of individual seats that can be rotated to face each other for conversation, or to make it easier for passengers to get in and out. The final two seats are a sofa-like bench that's tucked in just before the near-vertical rear glass area; this set-up allows the middle row occupants to recline their seats if there's nobody sitting behind them, creating an aircraft-style 'sleeper seat'.

The cabin makes extensive use of touch screens, as well as what would appear to be projection technology on the side glass.

Toyota is also using the Tokyo event to showcase SORA, a new hydrogen fuel cell bus that it plans to introduce in small numbers in the Japanese capital in 2018. The bus, which has 22 seats and an overall capacity of 79, has a range of around 125 miles in ‘Tokyo traffic conditions’ and takes around 10-15 minutes to refuel with hydrogen. Its mechanicals are, in effect, scaled-up and multiplied components from the Mirai.

The SORA bus is around five times more expensive than a conventionally powered alternative, but Toyota expects that government and city-based incentives will bring the two prices much closer together.

Could you see yourself driving the Toyota Fine-Comfort Ride concept in the future? Tell us what you think below...