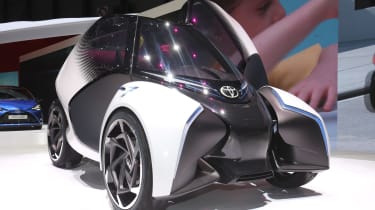 This is the Toyota i-TRIL, a Geneva Motor Show concept designed to demonstrate how the Japanese manufacturer thinks urban mobility will look in the future.

The i-TRIL is a fully electric three-seater, with a one-plus-two layout. It features Toyota’s Active Lean technology, as seen on the previous i-ROAD show car, and is designed as an alternative to everything from city cars to small hatchbacks or even motorcycles.

The concept is 3,000mm long - a full 60cm shorter than a VW up!, although the i-TRIL’s front track is just 1,200mm, or around 40cm less than the width of Volkswagen’s city car. Toyota says its vehicle’s seating configuration - with one occupant up front and two in the second row - means that the i-TRIL can accommodate three adults in comfort. 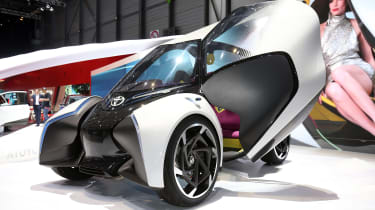 The driven rear wheels stay flat on the road surface, and a hinge between the back axle and body allows the body and front tyres to lean in corners. The car has a remarkably small turning circle of four metres - roughly the same as Toyota’s ultra-manoeuvrable iQ city car.

The doors open with a butterfly mechanism - but Toyota says their design means they can be opened and closed within a regular parking space. Opening the doors also removes a portion of the i-TRIL’s floor, allowing the driver to step out without having to stretch their legs. 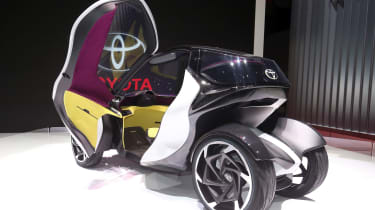 Toyota has not issued performance figures but while it states that the i-TRIL has been created with autonomous functionality in mind, it has been conceived to be ‘fun to drive’. The car’s battery pack is large enough to allow it to travel more than 185 miles between charges - which should be a decent range for urban use.

Inside, the driver has a laid-back seating position and there are no conventional pedals; steering, acceleration and braking are conducted through drive-by-wire technology and a pair of what Toyota calls ‘control nodes’, similar in principle to computer mice or games controllers.

There’s no dashboard or obvious switchgear either; the i-TRIL uses a head-up display to show key information when it’s being driven, and Toyota claims it’s been designed to respond to voice commands instead of conventional buttons.

All the latest from the 2017 Geneva Motor Show here...