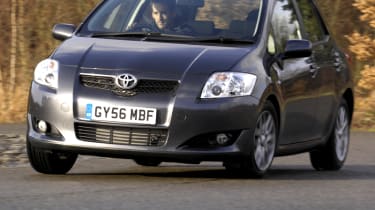 The Auris is a capable all-rounder that's a big improvement on the Corolla. It offers Toyota's traditional solid build and is likely to provide unbeatable reliability. However, despite its practicality and comfort, it does not make the giant leap needed to trouble the class-leaders. Toyota could also have been more a little more daring with the styling, too.

Any all-new model carries a huge weight of expectation. But when the vehicle in question is replacing the world's best-selling family car, the pressure really is on.

That's exactly what the Toyota Auris is charged with doing when it takes over from the legendary Corolla in February. We've already shown you a taste of what the newcomer has to offer in Japanese trim in Issue 935, but now Auto Express has put the Auris to the test on the UK's demanding roads.

After enduring a troubled conception - company bosses sent the original design back to the drawing board after seeing the futuristic Honda Civic for the first time - initial impressions of the Auris are mixed. Its biggest problem is getting noticed at all. Our metallic grey test car looks pretty anonymous thanks to its evolutionary, rather than revolutionary, styling. It combines the solid silhouette of the outgoing Corolla with the face of the Yaris, and the result lacks the visual drama of its Japanese rival.

Nonetheless, the firm has tried to inject some much needed character inside, where the swooping centre console and smart dials are a success. The gearlever is within a short reach of the steering wheel, and there's a full range of adjustment for both the seat and column, so finding a comfortable position is easy.

However, the facia is made from hard plastics, while the seat fabrics feel cheap compared to rivals'. Combined with the flimsy glovebox lids and rotary dials for the manual air-conditioning on our T3-spec model, the interior lacks the high-quality feel of the VW Golf or even the Ford Focus. There is plenty of space, though, and a flat rear floor meanstall passengers will have ample head and legroom. Unfortunately, the designers haven't been so generous when it comes to the load area. The 354-litre boot can't match the Ford's 385-litre capacity.

On the road, we found our car's 2.0-litre diesel engine to be an effective performer, and coupled to a slick six-speed manual gearbox, it makes motorway trips both relaxed and refined. Consumption of 52.3mpg is also impressive, and a neat pair of shift lights in the centre of the dash helps to optimise economy by letting you know when to change up and down.

At cruising speeds, the powerplant is muted, with wind noise being the main distraction. The soft suspension makes for a comfortable ride, but the trade-off is pronounced roll on twisty roads. There's plenty of grip, yet the numb steering and sensitive brakes will leave drivers of the Focus, Golf and Civic disappointed.

Equipment levels are generally modest, although air-con and nine airbags are fitted across the range. However, Vehicle Stability Control is a £350 extra on T2, T3 and T Spirit versions. Prices start from £11,995, and with Toyota's typically strong residuals and a broad line-up, the Auris represents a safe, if uninspiring, choice.