The hottest Auris got a lukewarm reception at its launch last year. Can the new SR180 raise the temperature? 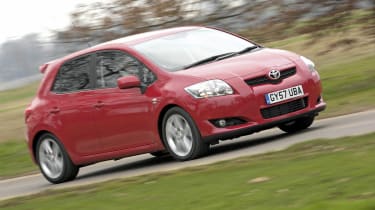 Fast diesels are few and far between in the family car sector, but the Auris SR180 looks smart, has strong performance and decent green credentials. With fuel prices going through the roof, a diesel hot hatch should be just the ticket for enthusiastic drivers, but we’re not sure many will be tempted. The Toyota’s drab cabin is uninviting and the chassis lacks sparkle. The SR180 is well equipped, but at £18,495 it’s not cheap.

If the arrival of the flagship Toyota Auris T180 last April failed to excite you, don’t worry – you weren’t the only one! The firm has already decided to replace its anonymous range-topper with this, the SR180 – but the changes to its diesel hot hatch are far from obvious.

The rear spoiler is larger than before and the privacy glass is new, too. Smart five-spoke 17-inch alloy wheels are another welcome addition, but the only other cosmetic improvement is the addition of fashionable Pure White paint to the existing selection of colours.

Inside, there’s even less to get excited about, as the familiar Auris interior, complete with distinctive dials, high transmission tunnel and gimmicky handbrake, is unchanged. The 2.2-litre D-4D oil burner, which still produces 175bhp, is also unaltered. Its fuel economy of 45.6mpg is the same as on the old T180, and so are its impressively low CO2 emissions of 164g/km.

On the road, the 0-62mph sprint takes 8.1 seconds and with bags of torque and six ratios to play with, in-gear acceleration lives up to the SR180’s hot hatch billing. High-speed refinement is also first rate, but the suspension is tuned for comfort rather than thrilling handling. The lowered set-up has been developed by Toyota’s motorsport division, but there’s still too much body roll in bends, and the steering lacks feedback.

With its diesel economy, lazy power delivery and comfortable dynamics, the SR is a convincing long-distance tourer, but if that’s the sort of car you’re after, there are plenty of cheaper options available.