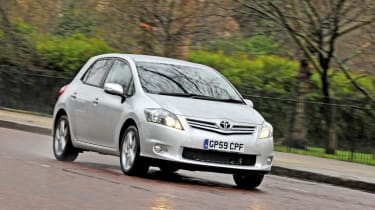 Anyone hoping that Toyota has completely changed the character of the Auris will be disappointed by this revised version. While it’s a little more distinctive to look at, it remains rather bland, inside and out. Nevertheless, it’s well made, generously equipped and comfortable and relaxing. Factor in low running costs and great dealer service, and the Auris still offers no-nonsense family transport – even with the spectre of Toyota’s high-profile recalls hanging over it. We just wish the company had injected a little bit more excitement.

The Auris has been under the knife. Toyota has given its Ford Focus-rivalling hatch a host of visual updates to make it even more appealing. But has it done enough? We drove a sporty SR version of the model to find out.

First impressions are promising. The facelift comprises an entirely new front end, with redesigned headlamps, bumper, grille and bonnet. At the back is a set of revamped lights. It’s still a rather generic shape, although our SR model adds a dash of style, with 17-inch alloys, tinted windows and a rear spoiler.

Inside, the facelift is just as subtle. New soft-touch materials introduce a quality feel, and the redesigned centre console has a clearer layout. Elsewhere, the instrument cluster is now easier to read, thanks to new ambient lighting. The SR also brings sportier seat trim, while the space on offer remains as generous as ever.

Under the bonnet, the updated Auris gets the same choice of Optimal Drive units as before, including a 1.4-litre diesel and a 1.33-litre petrol. Our range-topper featured a 130bhp 1.6 mated to a six-speed manual gearbox. Mid-spec TR models can be ordered with a semi-automatic transmission.

On the road, the Auris feels capable, but it doesn’t deliver on the promise of its looks. The smooth engine can launch the car from 0-60mph in 10 seconds, while the gearbox is light and easy to use. However, the SR never feels particularly quick or exciting. As for the handling, there are no vices. It’s agile enough, while the supple suspension settings offer a fine balance between ride comfort and body roll. But the Auris has little in the way of driver appeal, and doesn’t come close to matching the Focus’s thrills.

Nevertheless, it’s composed and quiet on motorways. Prices are class competitive, too – basic T2 models start at £14,695, and come equipped with air-con, electric front windows and seven airbags as standard.

Even though there’s no stop-start on this model, economy  is impressive – the SR claims 42.8mpg on the combined cycle, and emits 153g/km of CO2. The 1.4-litre diesel engine is the most efficient in the range, with figures of 60.8mpg and 125g/km.

As with previous hatchbacks from Toyota, this latest Auris is a good, solid car. As a comfortable, competent and reliable five-door, it’s a decent choice. It’s just not very exciting – and if you’re after something that’s a bit more fun, you should look elsewhere.

Rival: VW Golf Evergreen hatchback is a sturdy and refined all-rounder which is also good to drive. The 1.4-litre TSI is faster and more efficient than the Auris SR, and yet costs exactly the same.