Has the Toyota hatch left a pleasant taste after 12 months on test? Our chocaholic managing editor serves up his verdict on the rebranding from Corolla to Auris... 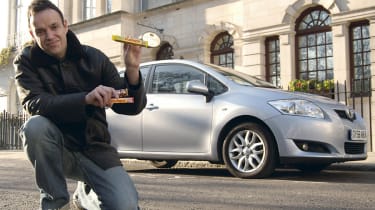 What's in a name? Quite a lot, actually! When you’ve got a successful product, rebranding it is a bold step into the unknown.

Of course, history shows it can be done. Sweet-toothed confectionery addicts like me can remember the days when Starburst were Opal Fruits and Snickers bars were Marathons.

So, when I received the keys for our Toyota Auris – the model that consigned the famous Corolla badge to history – I was curious to see if it could live up to its popular predecessor. First impressions weren’t great. Styling-wise, the firm seems to have worked on the premise that by offending nobody the car will appeal to everybody. But to my eyes it’s a bit bland.

Get behind the wheel, though, and things improve. Having been in the hands of art editor Darren Wilson for nine months, the Auris is well run in, and I’ve found it to be a capable motorway cruiser and nippy enough around town. Urban fuel economy is excellent at 40.7mpg, and the 2.0-litre engine delivers a deceptive turn of pace. The handling isn’t quite so adept – you’d liken it to lumpy porridge rather than the zing of Tropical Starburst, but I can live with that.

After more than 11,000 miles, the car feels as mechanically solid as you’d expect from a Toyota. But inside, a number of grubby marks have appeared on the trim that are proving awkward to remove. Combine this with the cheap switchgear and fairly uninspired layout, and there’s little to get excited about. Space in the rear is adequate, if not generous, although squeezing weekend bags and cases for four people in the 354-litre boot is a challenge.

So as the Auris prepares to return to Toyota after a full year on the fleet, what’s the final verdict? Well, if you want a competent car, look no further. Absolutely nothing has gone wrong, with the only problem a slightly skewed rear panel caused by a careless parker.

But if you expect character from your vehicle, go elsewhere. As for the name? Well, a straw poll of friends saw very few associate it with Toyota – Corolla was more recognisable. Indeed, one or two confused it with the smaller Yaris – which will be the next Toyota to grace our fleet, in the guise of a 1.4 SR diesel. Let’s hope life will prove to be ‘sweet’ with that!