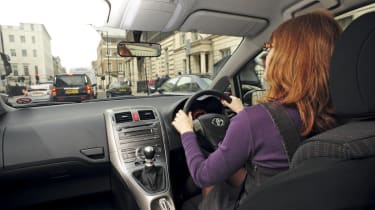 I have really been seeing red with the latest addition to the Auto Express fleet. That’s because our new Toyota Auris is fitted with a stop-start ignition system – so, at traffic lights, the newcomer really shines.

Most of my time at the wheel is spent tackling rush hour traffic. The Japanese car’s clever fuel-saving kit promises to reduce my environmental impact and my motoring bills – Toyota claims CO2 emissions of 136g/km and fuel returns of 48.7mpg. Better still, the car’s Optimal Drive features, designed to improve economy, are really easy to use, so I haven’t had to learn anything new.

Simply roll to a stop, put the gearlever in neutral and the petrol unit cuts out. A green ‘Eco’ light illuminates on the dash to tell you the system is in operation. It goes out when you press the clutch, and the engine fires instantly into life. What’s more, the computer records how long the unit has been shut off for during your journey, so it’s easy to monitor how eco-friendly you’re being.

This has inspired me to really work on my green driving technique. By shutting down the air-con and other power-sapping devices, I can extend the engine shut-off time at the lights and in traffic jams.

I’ve even started to follow the gearshift indicator lights on the dash. These shine when you reach the most economical point at which to shift up or down the slick six-speed box. It makes me feel like an eco-friendly Formula One driver!

Elsewhere, this Auris is identical to other variants. Although you would struggle to call the exterior distinctive, its lines are well proportioned. And the chunky detailing is enhanced by our optional £400 metallic paint, which sets off the TR’s handsome 16-inch alloys.

In the cabin, the first thing you notice is the sweeping centre console that houses the high-set gearlever and handbrake. Although it’s eye-catching, it robs the interior of accessible stowage. There’s a small cubby beneath the unit, but it’s extremely tricky to get at, particularly on the move.

The rest of the dashboard is attractively styled and logically laid out, while the supportive seats offer plenty of adjustment, so it’s easy to find a good driving position. Standard equipment includes climate control, a trip computer and electric windows all-round. In the back, there’s room for three adults, although some passengers have noted it feels a bit more cramped than the Hyundai i30 I used to run.

The Auris has the upper hand – just – over the Korean car when it comes to luggage space. Open the tailgate and you’ll find a 354-litre capacity – an increase of 14 litres.

When it’s not intentionally cutting out at traffic lights, the model impresses with its effortless driving dynamics. The steering is light and direct, while the gearshift is both smooth and precise.

On the open road, the Toyota feels composed and so far I’ve been pleased with the ride comfort around town, but I look forward to putting it to the test on some longer journeys.

One aspect of the Auris that is taking a little getting used to is its 1.33-litre engine. Over the past year or so, I’ve become used to the torquey diesels that have powered the other cars I have driven. By comparison, the small-capacity unit in the Toyota feels underpowered.

While it is keen enough around town, it can suffer at cruising speeds. In order to keep up with the flow of traffic on the motorway, I often need to shift down a gear. On the other hand, there’s no faulting the Auris’s overall smoothness and refinement.

I’m hoping it will prove economical. First impressions are that it will struggle to match the maker’s claims, although it’s still early days. Our car’s engine isn’t properly run-in yet, and most of my miles have been in and around congested urban areas. Plus, the figure should improve as I perfect my eco-friendly driving techniques.

It seems all I need to do now is keep my fingers crossed that I encounter quite a few more traffic lights on red...

It's already evident that the Auris feels most at home on busy city streets. Its excellent stop-start system works seamlessly, while the 1.33-litre petrol engine feels keen. Head out on to A-roads and motorways, however, and the Toyota begins to struggle. The small-capacity unit feels breathless even on moderate inclines, while refinement is no match for the class leaders. This car’s biggest problem, though, is its image. Park it alongside any mainstream competitor, and it simply looks uninspiring and anonymous. Can the eco benefits outweigh the lack of visual appeal?