How reliable is the Japanese family contender after 60,000 gruelling miles? We reveal all... 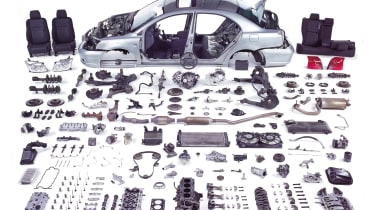 Few car makers can match Toyota’s reputation for reliability. To see if it’s really deserved, we put the big-selling Avensis through the ultimate test: our 60,000-mile stripdown challenge.

Auto Express’s spies have already spotted prototypes for the family car’s replacement undergoing tests. That model is scheduled to debut in showrooms here next year, and it will make the existing, second-generation Avensis even more attractive to second-hand buyers.

The anonymous looks are hardly likely to set your pulse racing, yet the styling was never cutting-edge, so the Toyota hasn’t really dated. But while the shape of our 2.0-litre D-4D D-Cat test model got a lukewarm reception, other parts of the design provoked much stronger reactions!

Soft seats, vague steering and a lack of muscle low in the rev range all attracted early criticism. With 114bhp, the diesel engine was always going to struggle in a mid-range sal­oon, but everyone who tried the Toyota felt it was tired and sluggish.

Still, this seemed to change the more we drove the car, and by 12,500 miles its performance had improved significantly. Besides, no matter what we thought of the Avensis’s pace, it was impressively refined at cruising speeds, with little wind noise – perfect on long journeys. Fuel consumption of 40mpg was also excellent.

On a practical note, the effective climate control and enormous 520-litre boot won the Toyota plenty of friends. But the ownership experience wasn’t as trouble-free as we had expected.

Even simple things such as the cloth upholstery in the Avensis’s cabin tried our patience. It easily attracted dirt, while the seats and carpets proved difficult to clean, too. The dashboard plastics were also starting to look a bit grubby by the end of the test.

Elsewhere, the rain sensor for the automatic wipers went wrong, radio reception was dismal and the factory-fitted sat-nav wasn’t logical to use – its fiddly remote control is tiresome and the display confusing.

The more miles we put on the Toy­ota, the less co-operative its gearbox seemed to become, and a number of irritating creaks started sounding from the depths of the interior. The chassis also lost some of its sharpness, with the amount of body roll increasing.

Worse was to come, however. As we cruised down a derestricted motorway in Germany, a red Alfa Romeo 156 drew up alongside us, with the driver pointing towards the back of the car. Thick white smoke was billowing from the exhaust like a James Bond gadget designed to foil chasing baddies!

After 45,859 miles, the Toyota’s complex emissions purification technology was clearly playing up. D-Cat is short for Diesel Clean Advanced Technology, and at its centre is a cata­lyst that stores soot, sulphur dioxide and nitrogen oxide. As soon as sensors report the filter is full, an addi­tional fifth nozzle injects fuel into the exhaust, which burns off deposits. These are visible as a small cloud.

However, the regeneration cycle only takes place below 100mph, and the entire process lasts about 20 minutes. After an extended high-speed cruise, the catalyst was close to its storage capacity, and at every opportunity it tried to operate, resulting in heavy, repeated smoke from the exhaust. In the UK this is unlikely to cause major problems thanks to our lower speed limits, but in Germany it has caused headaches for a number of owners.

Yet the biggest shock of all came after 52,819 miles, when our test car was deemed to require a new gearbox. Although it never let us down, it became increasingly notchy, and was replaced under warranty.

Even worse, at the final stripdown we found problems with the replacement box. Left to its own devices, it would eventually have been virtually impossible to engage fifth gear. But this was down to sloppy workmanship when installing the new transmission rather than a manufacturing fault.

Despite these indiscretions, though, it’s important to note that the Avensis still performed reasonably well, and plenty of drivers developed a soft spot for the inconspicuous four-door. Its discreet looks, refined diesel engine and spacious interior all hold obvious appeal, and our gearbox fault isn’t a widespread problem. While the Toy­ota wasn’t as reliable as we hoped, it is an affordable used choice – prices for non-D-Cat diesels start at £4,500.

Repair log Plumes of white smoke we experienced are clearly a flaw in the catalyst, but it doesn’t affect how it functions. The latest generation of engines gets larger-diameter pressure sensor pipes and increased volume to cater for extreme operating conditions. The D-Cat uses the same box as the standard 114bhp diesel, and Toyota isn’t aware of any issues with it.

Test figures The figures don’t lie! The 2.0-litre D-4D diesel engine in our Avensis loosened up considerably during its life, bringing welcome performance gains. Economy also improved, and while high-speed cruising will see returns drop below these figures, with gentle driving it’s easy to top 42mpg.

Motorway refinement is also impressive, and the appeal of the practical boot and spacious cabin is undiminished.

Well built Although the cabin plastics felt solid, they had started to appear grubby by the end of our 60,000-mile assessment. Elsewhere, we spotted rust marks at the final stripdown, plus corroded battery terminal clamps and tarnished metal cables and hinges under the bonnet. But this is superficial – there was no wear on the cylinders, pistons or valves.

Gear wheel wear Wear to one of the gear wheels in the replacement transmission was caused during installation by an incorrectly torqued bolt.

Bumper corrosion Rust was forming on the edges of the front bracket behind the bumper. The steel sheeting is strong, but corrosion is ugly.