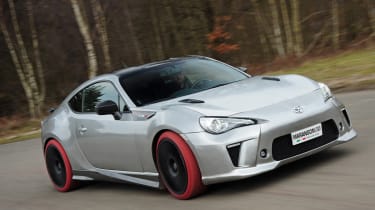 As a speculative look into the future of fuels, the Eco Explorer is an interesting experiment. But it works better as a glimpse of what a more powerful GT 86 could be like. The performance upgrades and those wide tyres haven’t spoiled the superbly balanced chassis, and even though the stiffer ride won’t suit everybody, this is still an utterly fantastic car to drive.

Tuners have been itching to work on the Toyota GT 86 since it was launched, and now wacky Italian tyre brand Marangoni has beaten its rivals to the punch. The GT 86-R Eco Explorer was first seen at the Geneva Motor Show last month, and is an intriguing (and brightly coloured) one-off special. Auto Express was offered an exclusive first test drive.

The Eco Explorer gives Toyota’s sports coupe an aggressive visual makeover, better performance and stronger eco credentials. By fitting an LPG tank under the boot that allows the GT 86 to be run on compressed ammonia, Marangoni claims to have given it a CO2-free range of 111 miles, as there’s no carbon in ammonia. And the car can switch back to petrol powerif you want to have more fun.

A tank of ammonia costs about £5, and as it’s stored the same way as LPG, the infrastructure is already in place. But there’s a catch: the Bigas system only works below 2,800rpm, and the tank adds a fair bit of weight.

To help compensate for this, Marangoni has upped the car’s power with a Milltek exhaust that fills the cabin with a raucous bark when you push the start button. It also adds 20bhp, taking the GT 86’s total output to 217bhp. And a set of uprated Brembo brakes helps to rein it all in.

The good news is that, despite the additional weight, the Eco Explorer is still just as enjoyable to drive as a standard GT 86, so on track the agile chassis and responsive steering make it great fun. Plus, the engine now revs quicker and sounds much better.

On the downside, the large 19-inch matt black alloy wheels make the car much firmer on the road, with bumps and crests sending jolts through the cabin.

Outside, those alloys, plus carbon fibre trim on the spoiler, diffuser and side vents, all give the Toyota coupe a much meaner look. The suspension set-up has been tweaked and lowered, too, so the striking bright red M-Power tyres now fill the wheelarches.

Inside, the Sparco racing-style bucket seats are very grippy and supportive, and add an extra sense of occasion to an already eye-catching sports car.