Toyota GT 86 Aero gets special styling updates, but the standard car is a better buy 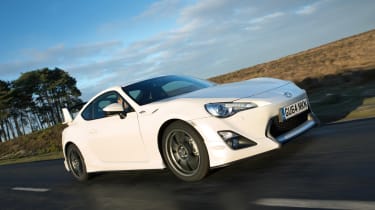 The additions to the Toyota GT 86 Aero are purely aesthetic, so unless you fall in love instantly with the brash rear wing and pumped-up body kit, we’d save some cash and opt for the standard car. It remains great fun to drive when the right road presents itself though, and nothing else can offer the same back-to-basics rear-wheel drive thrills on such a small budget.

When the Toyota GT 86 first went on sale, it wowed us with its back-to-basics rear-wheel drive layout and old-school handling. However, after we lived with a Subaru BRZ (the GT 86’s sister car) for six months, the firm ride, low quality interior and disappointing fuel economy meant the novelty wore a little thin.

So in an attempt to boost interest again, Toyota has dropped the price and added two special editions. The first is this GT 86 Aero, which keeps the same 197bhp four-cylinder Boxer engine but comes with various sporty add-ons.

The styling upgrades won’t be to everyone’s taste, and nor do they come cheap. The car you see here costs a not inconsiderable £28,245 – thanks to the optional £750 Touch and Go sat-nav system. Overall the Aero is £2,500 more than the standard GT 86 (and £5,000 more than the entry-level Primo model) which gets you new front, side and rear skirts, as well as a huge Subaru WRX-style rear wing. The aggressive look is completed with a set of bigger 18-inch ‘Ultraleggera’ alloy wheels finished in Anthracite grey. 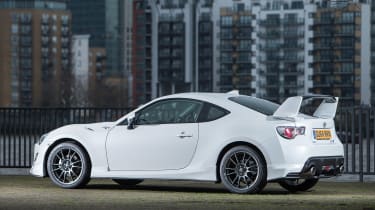 To drive, it’s identical to the normal car so it loves to be revved – all the way to the 7,500rpm red line – and is perfectly suited to a twisting B road. The steering is super sharp and the firm suspension means it corners with little body roll. Like before, you can turn the stability control off altogether – allowing a bit of slip from the rear wheels – but leave it and you can push on in confidence.

Around town however, the rock-hard ride is tiring, and at motorway speeds the lack of sound insulation will leave your ears ringing. Also, in a world where even the hottest hatches can manage 40mpg, the GT 86’s 34.9mpg and 192g/km CO2 emissions leave a lot to be desired. 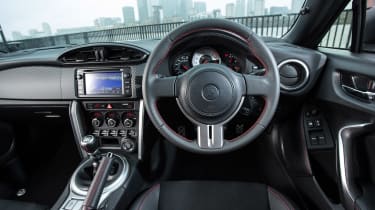 There’s no denying the GT 86 Aero will turn heads, but for £27,495, unless you really want the brash rear wing and larger alloy wheels, we’d suggest that a standard model with a few choice extras represents better value for money.

Indeed, Toyota has now released a base-spec ‘Primo’ version, which does without features such as keyless entry and automatic headlights, and actually epitomises exactly what the lightweight, rear-drive sports car should be all about. It’s yours for just £22,495.