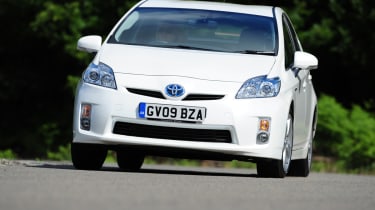 The Prius is the world's best-selling hybrid and there's a good reason for its success. The petrol-electric powertrain is reliable, refined and extremely fuel efficient, allowing drivers to travel for short distances in full-electric mode or with a combination of the engine and electric motor.

Power comes from a 1.8 litre petrol engine with 98bhp and an electric motor. Both units work together for a total of 132bhp. Over short distances – a mile or two at best – and at low speeds the Prius can be powered by the electric motor only, making for silent, emissions-free motoring. Under normal conditions, both the engine and motor work together seamlessly to provide punchy performance. The CVT gearbox is the only slight downside and can be noisy. Handling is impressively tight but the steering is uninvolving, meaning driving thrills are few and far between.

The Prius claims one of the lowest CO2 emissions figures on the road. At just 89g/km it's free from road tax. Economy is also impressive, with 72.3mpg claimed as a combined figure. The expensive part of owning a Prius is buying it in the first place .

With a body specifically designed to cut through the air as aerodynamically as possible, designers have had to make some compromises with the styling of the Prius. It has a slightly awkward profile but the front and rear are both sharply designed. However, for its price the interior looks hi-tech but the plastics are hard and scratchy.

Some hybrid models have to make room for the batteries needed to power the electric motor and this often results in a small load area. In the Prius though there's a boot which is bigger than that of most family hatchbacks and it can be extended even further by folding the rear seats flat. There is a large digital read-out on the centre of the dash and a head-up display as standard. Basic kit is generous, with all models getting air-con, electric windows and keyless go.

Despite the futuristic sounding powertrain the Prius has actually been using a petrol-electric set up since 1998. In that time it has proven itself to be incredibly reliable and any worries about the batteries will be put at ease by the fact that some of the very first Prius models are still going strong. Euro NCAP have awarded the Prius a maximum five star rating for crash safety.