Plug-in hybrid version of its fourth-generation Toyota Prius gets a price cut at launch. Here are all the details. 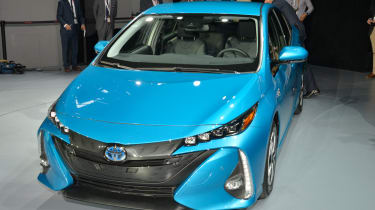 Toyota is adding to its Prius range with the addition of a new plug-in hybrid variant. Revealed last year at the New York Motor Show, the Prius Plug-in is on sale now with a new price tag.

Prices for the new Prius Plug-in Hybrid have been given an abrupt reduction to the tune of £3,200, meaning it more significantly undercuts the BMW 330e. Business Edition Plus models now start from £29,195 after government incentives, or £30,695 for the model with the solar roof. The flagship Excel model also gets a price slash, and is now priced from £31,395.

It's the second-generation of the plug-in hybrid Prius, and will sit alongside the regular hybrid model in the range. Using the same 1.8-litre petrol engine, the Plug-in's powertrain gains a larger 8.8kW/h lithium-ion battery pack and dual motor drive system.

• Best hybrid cars on sale at the moment

The 283mpg official figure makes it, on paper at least, 108mpg more frugal than the regular Prius. Claimed CO2 emissions are 22g/km, which is 48g/km less than the standard version and a 17g/km advantage over the VW Golf GTE. 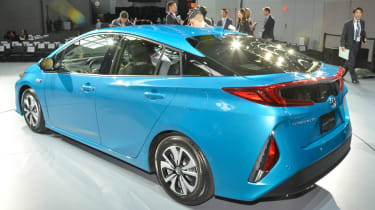 Toyota claims that the Plug-in can be driven at up to 84mph in pure electric mode, with an EV range of 30 miles – twice that of the old Prius. Charging time is said to be around two hours and 20 minutes.

New tech such as a battery-powered heating system and gas injection air conditioning help the Prius to avoid using its petrol engine wherever possible, while the tweaked exterior means a low drag coefficient figure of 0.24Cd. 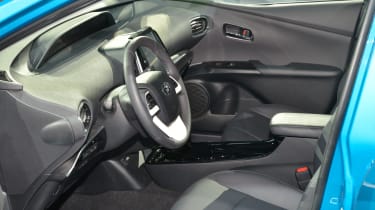 This is thanks to the body, which is 15mm wider and 20mm lower to the ground than the standard Prius, and features such as the new 'double-bubble tailgate glass and an active grille shutter. Unique headlamps and a boomerang-style LED rear lamp design help it to stand out, too.

However, in the cabin the larger batteries have meant a switch to a four-seat layout, with the centre console running the full length of the cabin. Exterior differences aside, the dashboard layout is similar to that of the standard hybrid though with extra graphics on the display screen for the plug-in powertrain plus a few additional buttons. UK order books are open now.