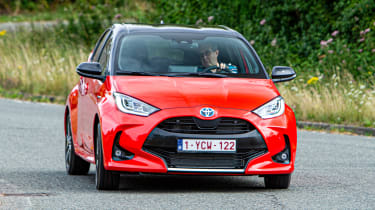 The latest Yaris is right in the mix, and should be on the shortlist of any supermini buyer – especially those who do most of their driving around town. It may ultimately end up being trumped by the Fiesta on driving dynamics and the Clio on space, but its hybrid powertrain feels mightily efficient in the right conditions. We’d suggest steering clear of high-end editions, though – on grounds of both value and ride quality.

When the last Toyota Yaris was offered with a hybrid powertrain, it seemed a little bit ahead of the curve. But times change, and the fact that the all-new fourth generation of the car is being offered only as a hybrid is very telling. Toyota clearly thinks that society is ready for electrified superminis. It could well be right.

We tried a very late prototype of the Mk4 Yaris in Portugal earlier this year and came away encouraged. Now we’ve had a chance to try the car, in full production spec (a left-hand-drive European model) and on British roads. And with full knowledge of how much Toyota is planning to charge for it.

UK buyers are being offered four trim levels, if you discount the limited-run Launch Edition. The range starts with Icon, at £19,910, which brings 16-inch alloys, a seven-inch infotainment system with Apple CarPlay and Android Auto, a reversing camera, auto headlights and wipers, air-conditioning, electrically adjustable side mirrors and electric front windows.

Find another £1,060 and you can step up to Design (£20,970), which includes a different design of alloys, an eight-inch infotainment display, LED headlights and tail-lights, and electric rear windows. 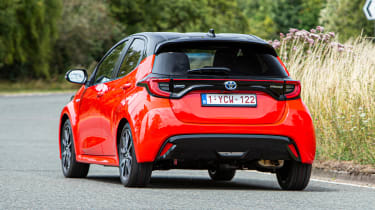 Dynamic (£21,920) features 17-inch wheels, dual-zone air-con, keyless entry and push-button start. And then the peak of the range, the £22,220 Excel, includes auto-folding side mirrors, blind-spot monitoring and rear parking sensors with auto-braking.

These prices don’t exactly look cheap – and they aren’t. But they’re close to Ford’s new mild-hybrid Fiesta in Titanium trim. And Toyota has worked hard on the finance numbers. Put down a deposit of around £4,300 on a Design-edition model and you’ll pay £189 a month over four years; the aforementioned Fiesta will cost you about a tenner a month more on the same terms.

A decent drive on a mixture of motorway, A-roads and urban crawl shows where the new Yaris’s strength really lies: it’s a great supermini for the city. Around town the pleasingly direct steering and taut chassis make it easy to manoeuvre, and the hybrid powertrain does spend a lot of its time running on electricity alone. We saw 65mpg on our mixed route, and perversely, that figure rose sharply in every town centre.

That’s not to say the Yaris is out of its depth elsewhere; it’s happy (and efficient) in traffic between 40mph and 60mph too. The steering isn’t a match for a Fiesta’s, but not much else in the class feels quite as crisp.

Motorways are probably the weakest area for the car; the hybrid system is closest to feeling strained here, although the three-pot grumble is drowned out by a fair amount of wind and road noise anyway. The uninvolving CVT transmission gets in the way of B-road thrills, too. 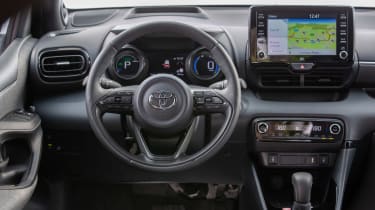 Our only concern is that the Toyota’s ride is perhaps a tad firm for UK roads. Its suspension – MacPherson struts at the front and a torsion beam at the rear – is generally compliant, but there’s the odd skip from the back end of the car where the beam isn’t able to isolate bad potholes, and too much fidgeting over patterned broken surfaces.

It’s worth pointing out, though, that our car was fitted with 17-inch wheels and firmer suspension, a mix that will be standard on Dynamic and Excel editions. The Design model sits on a softer set-up and 16-inch wheels. We already think  that will prove to be the pick of the range.

Inside, the fascia is smart and functional, and it’s good to see a half-decent infotainment system, with the proper phone connectivity, mounted high on the dash where it’s easy to use. If you’re a Toyota owner, you’ll recognise lots of the switches, but they’re solid and functional.

There’s desperately little flair in the choice of materials, mind. While everything feels well screwed together and there’s padding in key areas, there’s no sense of fun – no flashes of colour to break up the swathes of dark plastic, just the odd piece of chrome that looks like an afterthought.

The rear has enough space for two adults, although anyone over six feet may struggle for headroom. And the boot capacity is 286 litres, which is fair for the class but no more.