The new Vauxhall Astra was revealed to the public in June, but we’ve had to wait a few more months to cast eyes on the more practical Sports Tourer estate.

But the wraps have been pulled off the new load lugger just days before its Frankfurt Motor Show debut – along with details on design, engines and specs. It’ll go on sale next year, commanding a small premium over the standard hatch.

From the front, the Astra Sports Tourer echoes an identical design to its conventionally-styled sibling. It gets the same wide chrome grille and LED headlamps, while at the bottom it lifts the hatchback’s sleek bumper design and fin-like fog light surrounds.

It’s much more different down the side, though. There’s a slightly arched sloping roofline, emphasised by the curved window line that dips towards the rear. Both the B and C-pillars have been blacked out, giving the illusion of a large glasshouse, and all cars get a pair of sharp creases in the body work.

At the rear the Sports Tourer looks more familiar, while the car in our pictures shows a shark fin aerial, LED taillights and tinted rear windows. The number plate has been lifted from the bumper to the bootlid, and – like on the hatch – the high level brake like has been incorporated into the rear spoiler.

While on the outside the next-generation Astra Sports Tourer is exactly the same size as before, it’s actually bigger on the inside. Vauxhall claims an additional 26mm of front passenger headroom, while those in the rear benefit from an additional 28mm.

Bootspace has increased too, from 1,550 litres to 1,630 litres with the 40/20/40 rear seats folded. It’s also up to 200kg lighter, which should help reduce emissions and boost fuel economy.

For the first time on a Vauxhall, buyers will be able to spec a hands-free automatic tailgate, operable via a kick under the rear bumper. The Sports Tourer is also available with side rails, dividing nets and other fastening options for increased versatility.

Engines mirror the hatchback, and range from 98bhp to 197bhp – including the all-new 1.4 Turbo and 1.6-litre Whisper Diesel. There’s no word yet on whether the estate will get the hatchback’s efficient 1.0-litre three-cylinder petrol.

Vauxhall’s innovative OnStar personal concierge service will be carried over too, along with 4G connectivity, Apple CarPlay and Android Auto. The car’s interior will take a jump up in quality, with its sights set firmly on the VW Golf Estate and Peugeot 308 SW.

Prices will be announced in due course, before the car arrives in showrooms early next year. That said, the hatchback costs from £15,295 – and we can expect a premium of around £1,000 like-for-like for this bigger, more practical estate model.

Do you like the look of the practical new Astra Sports Tourer? Let us know what you think in the comments...

Vauxhall Astra production could be moved out of UK 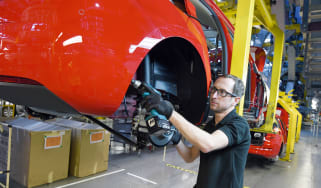 Vauxhall Astra production could be moved out of UK