It's been a bumper year for Vauxhall. A new Corsa, a hot Corsa VXR the Adam S, and an all-new Viva city car have all gone on sale but the best is yet to come. The all-new Vauxhall Astra has made its debut at the 2015 Frankfurt Motor Show but we've already been treated to a sneak preview to see whether it can finally rival the Volkswagen Golf and Peugeot 308 for kit, quality and design.

First impressions are good. While it’s still unmistakably Astra, it’s been transformed from a mundane family hatchback into a desirable and stylish compact exec. The new car gets a redesigned front-end, new LED matrix headlamps and sportier profile. Those LED lamps are a Vauxhall first, and constantly adapt to every traffic situation using a front-mounted camera to adjust the beam for other vehicles or pedestrians. 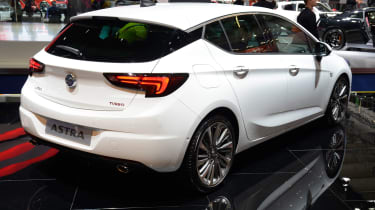 With 2.9 million Astras sold in the UK in since 1979, this seventh-generation model has a lot to live up to. Down the side, designers have incorporated the distinctive blade-like crease in the body work, while behind the rear window all cars get a Jaguar XJ-style gloss black C-pillar – giving the illusion of a floating roofline, and further emphasising the Astra’s sporting aspirations.

At the rear you’ll find a bold bend connecting the redesigned taillamps and a standard fit rear spoiler. L-shaped LED lights are optional, and give the car a truly distinctive look at night.

The 2015 Astra will debut with a range of new powertrains of varying power outputs. There will be a new, naturally aspirated entry-level 1.4, three turbocharged petrols; a sub-100g/km three-cylinder 1.0-litre, a powerful 1.6, and an all-new 1.4-litre ECOTEC turbo unit offering up to 250Nm of torque. It weighs 10kg less than the current 1.4-litre turbo, thanks to a new aluminium block, and can return 52.3mpg on the combined cycle.

The new 1.6-litre 'Whisper' diesel is the sole oil-burning choice, with no powerful 2.0 available from launch. That said, it’s available in three power outputs ranging from 108bhp to 158bhp, so there should be an engine to suit all tastes. The most economical ecoFLEX model will return a staggering 91.2mpg and emit just 82g/km of CO2 providing you spec the smallest 16-inch alloy wheels. 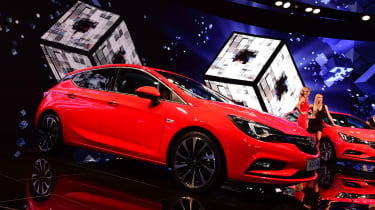 It won’t have escaped Vauxhall’s attention that a Ford Focus RS is about to go on sale, and all signs point to an even more powerful Astra VXR landing in due course. However, a conversation with Astra product manager, Adam Collins, revealed we’ll need to wait for the new GTC three-door, which won't arrive for at least another year or so.

In the shorter term, the most powerful Astra you’ll be able to buy will be the 197bhp 1.6 Turbo. That said, Vauxhall is also set to revive the Astra GSi brand in the not to distant future, hinting at a rival for the Ford Focus ST. The model will sit below the VXR with around 250bhp on tap.

Bucking the 'bigger is better' trend in family hatchbacks, Vauxhall has actually reduced the size of the new Astra yet improved passenger space. It's 49mm shorter and 26mm lower than the outgoing car, which Vauxhall says reduces weight and improves aerodynamics. In fact, the seventh-generation Astra is actually up to 200kg lighter than before thanks to a tough new high-strength steel body cell construction. All cars boast a drag coefficient below 0.30cd, helping reduce fuel consumption and boost CO2.

Inside, you’d think the shorter wheelbase would adversely affect legroom, but rear passengers get 35mm more space to stretch out than before. Having sat in the back of our studio car, it’s clear to see Vauxhall’s engineers have put a lot of time into making the new Astra feel bigger and more accommodating. The black headlining in our mid-spec SRi did make things feel a little more claustrophobic, but there’s more than enough space for a six-foot adult to sit behind a similarly-sized driver. 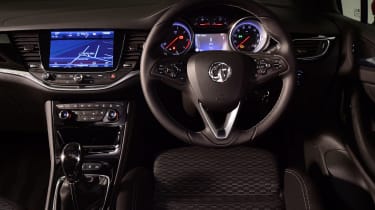 The boot is bigger too. Up from 351 litres to 370 litres, it’s almost as large as the 380-litre boot you’ll find in a Volkswagen Golf. It’s deep and wide, though we’re warned the capacity will drop if you go for the space saver spare wheel. There’s a big ridge if you fold the seats, down too, which could prove tricky if you regularly slide things into the back.

Up front, the standard fit seven-inch central touchscreen sits flush with the sloping top of the dash and above a less cluttered and more premium-looking centre console. It’s really nicely finished, actually, and is more than a match for Peugeot’s classy 308 and falls only slightly short of the class-leading VW Golf.

New tech debuts, such as Vauxhall's 'OnStar' road assistance connectivity, also feature on the Astra. They system is able to automatically contact Vauxhall if an airbag is deployed, and alerts the emergency services if it can’t communicate with the driver. Owners will also be able to use OnStar as a kind of concierge service, and use Vauxhall’s team of dedicated representatives to search the web and wirelessly input destinations into the car’s sat-nav. We tried it in the studio – and despite still being in its infancy, actually worked really well. 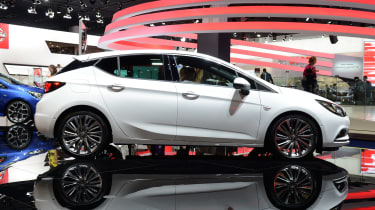 The new Astra is also a 4G mobile data hotspot, allowing up to seven smartphones to be connected at once. The Intellilink infotainment system, which debuted in primitive form in the Corsa, is now compatible with Apple Carplay and Android Auto. Apps such as Google Maps, Skype, Whatsapp and Spotify can be controlled through the car's interface, working using the car’s voice recognition.

Lane Keep Assist, Advanced park assist, forward collision alert, autobraking and traffic sign assist all debut on the Astra. Top spec cars will get an 18-way adjustable drivers seat with massaging function, and the rear seats can even be heated on top-spec Elite cars.

The new Cheshire-built Astra's range is a little more straightforward than before, with five main trim levels and two additional ‘Nav’ models. Just over £15k will get you in the entry-level Design spec with a naturally-aspirated 1.4-litre petrol engine, while a range-topping Elite Nav with 1.6 CDTi BiTurbo starts from £22,815. 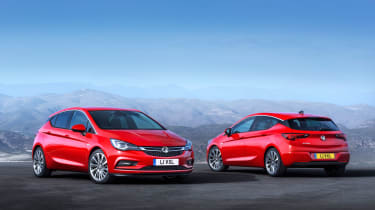 For just £805 more you can have the 103bhp 1.0-litre three-cylinder turbo petrol that debuted on the new Corsa. It gets 10bhp less than the Corsa, but is capable of up to 65.7mpg and slips under the 100g/km CO2 barrier (with the 16-inch alloys). A further £805 gets you Tech Line spec, which adds the bigger eight-inch touchscreen with voice recognition, as well as a leather steering wheel and front armrest.

Energy spec kicks off from £17,285 and brings along 17-inch alloys, as well as a heated steering wheel and front seats. The SRi is £600 more, with a different wheel design, a Driving Assistance pack with front-view camera, auto headlamps and wipers and sports seats. It also gets the innovative new OnStar tech. 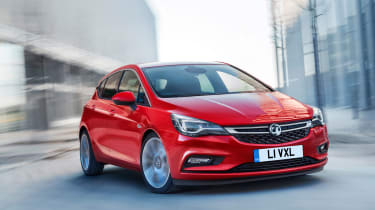 Vauxhall claims those prices offer better value than the previous Astra, being anywhere from £150 to £2,200 cheaper spec-for-spec than the old model. The only catch in that is that there’s no longer a more basic Expression trim, which previously meant you could pick up an Astra for just £12,995.