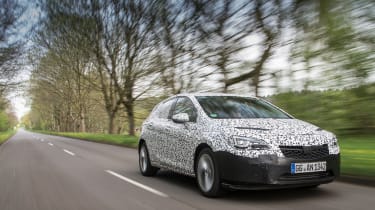 Judging by our drive of these Vauxhall Astra prototypes, the new Astra is full of promise. It’s struck a good blend of ride and handling for UK roads, is spacious and has some interesting tech. Let’s hope Vauxhall gives it prices buyers can’t ignore in a hugely competitive market.

It’s a big year for car production in the north-west of England. The new Land Rover Discovery Sport is now following the Range Rover Evoque down the 24/7 assembly lines at Halewood, while across the Mersey in Ellesmere Port, Vauxhall workers are gearing up to start building the all-new Vauxhall Astra.

While many buyers are turning their backs on traditional hatches in favour of SUVs, the humble hatchback is still big business: the VW Golf is Europe’s best seller, while the current Astra is still sitting pretty at number six in the UK sales charts, with the Golf at four and the Ford Focus at three.

So this all-new Astra is a big deal for Vauxhall and the UK, which is why owner GM has been spending so much time over here developing the new model. And why we’ve been invited to drive an early prototype and to give our feedback – GM is obsessive about making this car a winner. It’ll not only be an Astra in the UK and the rest of Europe, but a Buick in the US and China and even a Chevy in other markets.

Until the swirly camouflage is removed in a few weeks’ time to reveal what we’re told will be a stunning, sleek new design, and prices and specs are announced later in the year, we’re only able to assess how this early car drives and the practicality on offer. 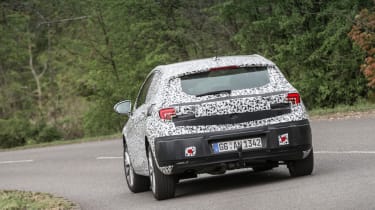 Key to the former is weight loss – the current Astra could be described as ‘big boned’, heavier than rivals with the negative impact that has on the ride, handling and efficiency. The new model is, on average, 130kg lighter, with a maximum weight saving of 200kg and minimum of 120kg. It’s immediately noticeable when you compare the two cars: remember when you were a kid and you went to run and someone had hold of your jumper? That’s how the old Astra feels when you’ve driven the new one.

Space and access for passengers is vastly improved, too. Even in an interior draped in cloth to disguise the new design, there’s more rear knee and headroom, while the door opening is much wider for far easier access. With the driver’s seat set for a six-footer, a passenger of the same size could sit behind with a few inches spare legroom. The floor across the back is almost flat, too.

We were pretty comfortable up front, while boot space is said to be close to the current model’s 370 litres, which is 10 litres shy of a Golf’s. All that in a car that’s smaller than at present – 49mm shorter and 26mm lower – due to better packaging. 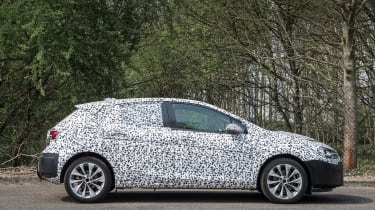 When the new Astra arrives around November, engine choices will range from 94bhp to 196bhp, and include Vauxhall’s excellent 1.0-litre three-cylinder, plus 1.4 and 1.6 petrols – all turbocharged. Versions of the new 1.6-litre Whisper diesel will also be offered (although how a diesel can be described as ‘whisper’ is beyond us), and it’s the 134bhp version that we tried on the bumpy, broken, typically British roads in Bedfordshire GM is using to develop the car.

The engine’s not especially hushed, but impresses for smoothness and punch. Yet after a stint in the old Mk6 Astra, driving off in the new Mk7 is an instant revelation. The steering is lighter and more responsive – a bit too light away from the straight-ahead for our liking, which GM engineers say they can tweak before production – but the car immediately feels more responsive.

The prototypes were left-hand drive, so we were on the worse side of the road for drain covers, potholes and camber, but the new Astra copes admirably with broken surfaces. It’s comfy, yet communicative, smoothing off the worst bumps the old Astra and even the current Focus would announce more sharply. 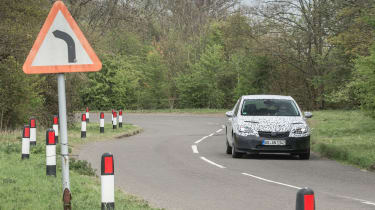 More impressive still was the body control. GM engineers referred to ‘head toss’ – how busy a nodding dog on the back shelf would be – and there’s far fewer large vertical movements in the car than before, and none of the floatiness that can be felt in a Golf. The new Astra sits nicely between the comfort of the VW and the Focus’ controlled firmness. It’s well suited to British roads and British buyers who want plenty of comfort, but still to feel connected to the road.

With steering that weights up nicely the faster you go and strong grip levels (in spite of smaller wheels and tyres – another weight saving), the Astra’s fun to drive, too. More so in the new 1.4-litre petrol we tried.

This new engine with 143bhp and 235Nm of torque spins freely, offers plenty of poke and produces an enjoyable and not too intrusive noise – certainly compared with the relatively rowdy old 1.4 petrol.

The driving position of our heavily clad, left-hand-drive test models was good, with well positioned armrests, decent leg space and well placed pedals (although the old car’s better for heel and toeing). We’d rather the gearlever was an inch or so forward so there’s less risk of bashing your elbow on the lidded storage box in between the front seats, but we liked the brake pedal’s linear, responsive feel. The old car’s infuriating handbrake, which seemed designed to trap your fingers, has been replaced by a far more convenient electronic parking brake.

Vauxhall also says there’ll be a strong tech story to tell on the new Astra. It’ll be the first car in the class to offer matrix beam LED lights, which provide full-time full-beam when driving out of built-up areas, with cameras that detect cars in front and dim the lights in the area that could blind their drivers. GM’s excellent OnStar safety and concierge call system will also be available.

So dynamically and from a practical point of view, these early cars reveal that the Astra will be a major competitor against not only the Golf and Focus, but our current favourite five-door family hatch, the SEAT Leon.

What we don’t yet know are details of prices or efficiency. Of course, Vauxhall says both will be competitive – and at the right price and with the right stats, and assuming that the design is as striking as the shape suggests, the Astra could be a real contender.

Click here for more info on the new Vauxhall Astra...