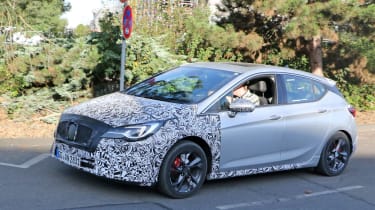 Ford needs to watch its back, as Vauxhall is on the warpath with a hot ‘GSi’ version of its new Astra. The recently revealed Astra family hatch isn’t due in showrooms until November after its Frankfurt Motor Show debut this September, but we’re already seeing thinly disguised prototypes of a spicier Astra GSi version testing on German roads.

We’ve previously heard about a cooking model of the new Astra destined to sit between the more mundane SRi variants and the scorching, three door-only VXR model, and this is our best clue yet as to what we can expect. The power output is estimated at around 250bhp; putting the Astra GSi right in the firing line of the Focus ST and the entry-level 247bhp Peugeot 308 GTi.

It’s likely this model will see the revival of the historic ‘GSi’ nameplate, used to designate hot Vauxhalls in the nineties and 2000s but abandoned in favour of the ‘VXR’ tag.  This camouflaged test car shows the more subtle direction Vauxhall will take with the GSi, with minimal exterior clues including a slightly beefier front bumper, thicker side skirts, twin exhausts, larger wheels and a mock diffuser rear bumper. 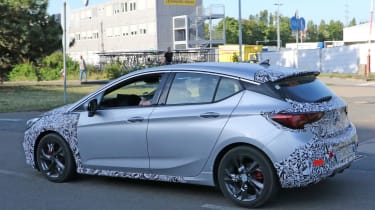 Red brake calipers also hint at the performance on offer, but it’s certainly a world away from the more lairy style of the current VXR. This will be the fastest Astra on offer in 2016 until the three-door VXR comes along in 2017 that will push power well over 300bhp to take on the Focus RS.

A likely engine candidate to produce 250bhp in the GSi is the 2.0-litre turbo petrol found in the current Insignia. But there’s every possibility that, with the trend for downsizing and emissions restrictions, it’ll be a highly tuned 1.6-litre petrol under the bonnet like the 308 GTi. A hot diesel version isn’t out of the question either, like its Blue Oval rival, and neither is a more practical estate body style. 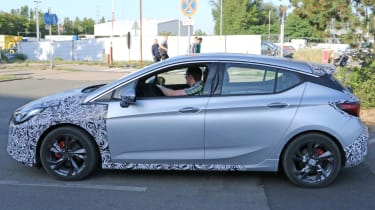 The GSi is well placed to take on established rivals, thanks to the new Astra’s lightweight body and chassis reducing kerbweight by up to 200kg. It’s also shorter and lower than the model that precedes it, but actually offers more space thanks to better packaging. Chassis tweaks will likely included lowered and stiffened dampers and an electronic differential to put the power down smoothly, while beefier brakes could appear.

Check out our top 10 list of the best hot hatchbacks on sale now...