Opel Motorsport will launch the £46,000 Corsa-e Rally at the upcoming Frankfurt Motor Show 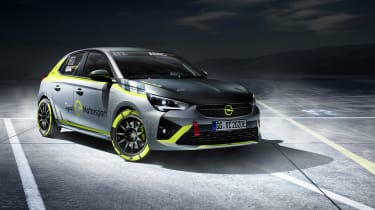 Vauxhall will launch the world’s first commercially available pure-electric rally car at this year’s Frankfurt Motor Show. Called the Corsa-e Rally, it debuts in Opel guise and features a range of chassis upgrades and a tweaked version of the standard car’s all-electric drivetrain. Prices are set to start from around £46,000.

The Corsa-e features uprated springs and dampers all round, larger disc brakes with four-piston calipers, new underbody protection panels and a mechanical handbrake finds its way into the cabin too. In addition, the car’s traction control, electronic stability control and ABS system have all been deleted.

• New Vauxhall Corsa-e to start from just over £26k

The Corsa-e Rally’s body-in-white is also lighter than the standard car’s and features an integrated roll-cage and fire extinguisher system. Thanks to a range of new lightweight, quick-release panels and a race-spec dry battery, it tips the scales at around 1,400kg. 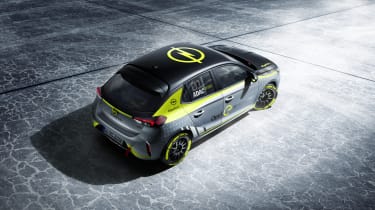 The Corsa-e Rally features all-electric drivetrain and 50kWh lithium-ion battery pack found in the standard Corsa-e hatchback, with power and torque standing at 134bhp and 260Nm respectively. Drive is sent to the front wheels which, but unlike the road-going version, it features a torsen differential.

Starting next year, Vauxhall’s Corsa-e Rally will compete in the single-model ADAC Opel e-Rally Cup. Vauxhall says the race series is tailored towards younger drivers, acting as an entry-point into rallying.

What are your thoughts on the new Vauxhall Corsa-e Rally? Let us know in the comments section below…