Cleanest-ever Vauxhall leads way in the value for money race 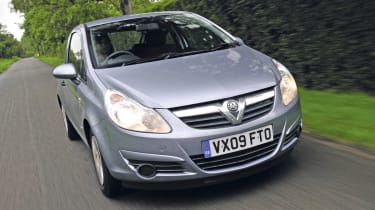 Vauxhall already has an impressive range of ecoFLEX models, and this latest Corsa version is another star performer. With a bargain price tag, frugal fuel consumption and low emissions, it really is the best all-rounder in the Corsa line-up. It’s not as much fun as rivals to drive and it could be even more efficient if it had stop-start. However, it’s a well built, good looking machine that doesn’t require owners to make any real compromises in the search for low-cost, eco-friendly motoring.

It's the greenest car in the history of Vauxhall – but at first glance, this Corsa may not look particularly revolutionary. However, thanks to a host of subtle tweaks to the gearbox, aerodynamics and kerbweight, the super-frugal supermini is able to return 70mpg on the combined cycle.

Going into battle with other green small cars such as Ford’s Fiesta ECOnetic and the VW Polo BlueMotion, the Corsa ecoFLEX is on sale now for £11,295. With buyers looking for ways to save money, could it be the car of the moment?

In a few years, Vauxhall will launch the electric Ampera, but while the Corsa ecoFLEX doesn’t feature stop-start or any hybrid-style trickery, it’s still extremely clean, with emissions of 105g/km.

The gearbox boasts a shorter second gear – for better low-speed response – but fourth and fifth are longer, which reduces fuel consumption on the motorway. Other changes include a 20mm lower ride height, narrower, low rolling resistance tyres and a 45kg weight reduction. These tweaks also mean that the little 74bhp 1.3-litre CDTI diesel returns 70.6mpg.

The unit is peppy around town, but can still hold its own on the motorway. Indeed, despite the longer gearing, the Corsa is still responsive, while Vauxhall quotes 85.6mpg on the extra-urban cycle.

Downsides? Well, the engine is noisy, and while the Corsa is agile, it lacks the fluidity and direct steering of the Fiesta.

Plus, it’s a shame Vauxhall couldn’t have dropped the Corsa’s CO2 emissions below the ‘magical’ 100g/km mark.

Both the Fiesta and Polo do exactly that, and don’t cost owners a penny in road tax as a result. However, 105g/km means a licence of only £35, and combined with a price which undercuts the Fiesta ECOnetic’s by £2,500, the ecoFLEX is clearly a winner when it comes to saving money.